To a place sacred to another pair of lovers — Arquà Petrarca – a village set in the hills above Padua. Here Petrarch — whose sonnets celebrating his love for Laura are the source of the love-language that characterises Romeo and Juliet — spent the last years of his life. This place has been invented and reinvented from the fourteenth century onwards as a site of literary pilgrimage. So, fortifying ourselves with a Petrarch and Laura pizza, we set off to find the house – discreet to the point of concealment in strong contrast to the hoo-ha of signs and souvenir shops around the Casa di Giulietta.

Petrarch’s house is possibly the oldest writer’s house museum in the world — it has attracted enthusiasts ever since the poet’s death. Cut into one of the mantelpieces is the date, 13th October 1564, and all the names of a group of Austrian students who’d travelled all the way across the Alps to see the room in which Petrarch died. In 1816, Byron came here too, on his way from Verona to Venice.

As Petrarch’s letters make clear, he consciously dramatised his poetic life of retreat here. He altered the house to be more poetic, adding a handsome portico. Here are all sorts of things that endeavour to realise and amplify the Petrarchanism of the place – his actual bookcase in the room in which he died, a series of lavish sixteenth-century frescoes describing his life and works, a box of earth brought over in the 1960s from his birthplace, Arezzo, and much more.

But what I am chiefly eager to see is Petrarch’s cat. Here it is — a real, embalmed cat – poor thing. It must, however, be one of the most famous writer’s pets in the world. It seems to have originally been displayed on a plinth, and is now set in a baroque wall tablet. 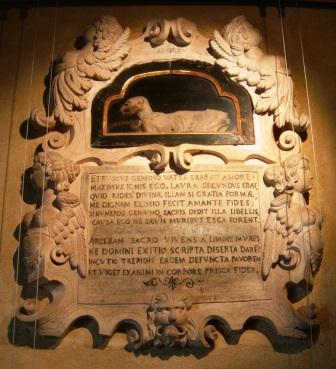 The verse below reads ‘etruscus gemino vates exarsit amore – maximis ignis ego, laura secundus erat, quid rides. divinae illam si gratia formae, me dignam eximio fecit amante fides; si numero geniumque sacris dedit illa libellis, causa ego ne saevis muribus esca forent. arcebam sacro vivens a limine mures, ne domini exitio scripta diserta daree incutio trepidis eadem defuncta pavorem, et viget exanimi in corpore priscem fides.’   This translates (rather roughly) as ‘The Etruscan Bard burned with twin loves – I was the greatest of his flames, Laura was the second. Why do you laugh? If it’s a matter of beauty and faith, I should have made ​​a superb lover. The Muse of Poetry gave no reason why I should not eat wild mice. I guarded the sacred threshold from mice to prevent anxiety that might have meant the fearful destruction of eloquent inspired writings. I died, full of life, my lifeless body faithful to the end.’

This cat is clearly a joke – and it was devised in 1635 by the then owner of the house in reference to a famous picture of Petrarch with his cat in his study. What interests me about this cat is what sort of joke it is. It’s a joke on the cultural investment in the rather notional love of Petrarch for the ever unattainable and unattained Laura (at best a sort of stalking, one could argue). But it’s also a joke at the expense of the cultural desire to possess the material traces of the (relatively speaking) immaterial — myth and story, words and sentiment. It is, above all, a meditation on the desire to re-embody the disembodied – to re-body Petrarch himself. It serves as a commentary on the long history of the fetishization of Petrarch’s remains — the way his bones have been subjected to a long series of disinterments, dismemberments, and evacuations. Nowadays, for example, the house holds a miniature copy of the tomb down in the church, which holds one of Petrarch’s ribs. Grotesque and magical, over-embodied, under-motivated, Petrarch’s cat perfectly describes the comic problem of displaying the writer’s house as the material conditions of the writing.

This was a problem in 1635 — it may be a problem for the future of writer’s houses, too. The poor cat has recently been demoted from ‘Venus’ room’ to the servants’ quarters. It suggests the possibility that other objects historically taken very seriously as material pointers to the embodiment of genius may also lose their power. For those in charge of conserving writer’s houses, the challenge is to find new ways of finding a ‘local habitat and a home’ for the ‘airy nothings’ of literature. But meanwhile I have unpacked my Casa Petrarca tea-towel, and my plaster figurine of Romeo and Juliet clinging together on their famous balcony is sitting next to my keyboard as inspiration, of sorts.