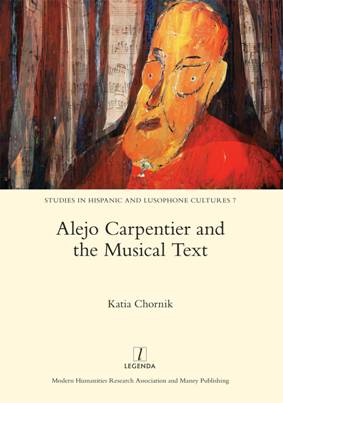 and launch of the book

Alejo Carpentier and the Musical Text

This lecture series has been organised by the
Embassy of Spain, Office of Cultural and Scientific Affairs &
Instituto Cervantes London

The Swiss-born Cuban novelist Alejo Carpentier y Valmont was the first Latin American to win the Miguel de Cervantes Award. His best known works include The Kingdom of this World, The Lost Steps and Explosion in a Cathedral. Carpentier conceptualised the notion of lo real maravilloso americano (the [Latin] American marvellous real, aka magic realism), exerting a decisive influence on the writers of the so-called Latin American Boom. Carpentier also cultivated poetry, criticism and cultural journalism, and his lesser known activity in music was similarly varied: he worked as a researcher, radio and record producer, concert promoter and writer of song lyrics and libretti. He incorporated music in his fiction extensively, more than any other Latin American writer of his time. Born in Switzerland in 1904 to French and Russian parents, Carpentier spent most of his childhood in Cuba. He settled in Paris in 1928, where he became closely involved with the avant-gardes. In 1939 Carpentier left Europe for Cuba and Venezuela. Following the Cuban Revolution, he took on several official posts, working as a diplomat in Paris until his death in 1980.

Katia Chornik is a Leverhulme Early Career Fellow at the University of Manchester’s Music Department. She specialises in music and literature, music and human rights, and Latin American popular music. As part of her ethnographic Leverhulme research ‘Sounds of Memory: Music and Political Captivity in Pinochet’s Chile’ and in partnership with the Chilean Museum of Memory and Human Rights, she has created and managed the online archive Cantos Cautivos (www.cantoscautivos.cl ), which compiles songs that were written, sung and listened to in political detention and torture centres in Chile. She is also working as co-editor of the OUP Handbook Don Juan in Music and Other Arts, addressing intermedial and cross-cultural versions of the Don Juan myth. Chornik’s research on music and human rights has received wide national and international attention through press coverage and her own contributions to media outlets.