One of the current MA students, Peter McLoughlin, has had a paper accepted for the upcoming English folk song conference at Cecil Sharp House in London. The theme of the conference is the history and transmission of traditional tunes and popular airs. Peter’s paper concentrates on Morris dance tunes from the Cotswolds. Once widespread in Oxfordshire, Gloucestershire and parts of the surrounding counties, many villages either had their own Morris dance team or enjoyed visits from other village teams on festival days. Between 1850 and 1890 there was a collapse in the tradition, with only two sides surviving into the 20th century. The movement to record what had been lost started with an Oxford antiquarian, Percy Manning, and his field-worker, Thomas Carter, 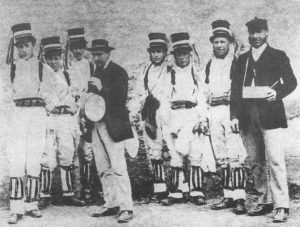 and continued with Cecil Sharp. Between them, they identified and interviewed around over 40 very old dancers with the most remarkable memories and recorded about 230 Morris dance tunes between 1894 and 1913.

Sharp realised early on that dancing styles varied from village to village. He also noticed that the tunes were uniquely linked to the dances. Peter is concentrating on around 18 versions of ‘The Princess Royal’ to demonstrate melodic diversity and to try to find the reason for its popularity in Morris dancing. He starts by drawing on Sharp’s writings to investigate this relationship before moving on to subject the tunes to a specially-devised analytical method that uses a combination of transposition and assigning of numerical values to pitches as a means of comparing the results in an Excel table.

The conference takes place on 6 and 7 October, and a draft programme is already available.