One of the current MA students, James McNeill, has been working on archival materials over the summer. Here he writes about his recent work:

My dissertation is on the subject of whether we can find the themes which Gerald Finzi saw in the poetry of Thomas Hardy to such an extent that he set 50 poems and had sketches for 50 more at his untimely death. Many people have thought of Hardy as a pessimist and a few commentators have suggested that Finzi might have been drawn by the sense of melancholy. Having sung the songs for more years than I care to admit to I just do not see that as a likely link for songs many of which seem to rejoice in the natural world. Finzi was widely read, had a library of 4000 non-music books and there has been mention of markings in his copies of Hardy. This non-music part of the Finzi Archive is at Reading University in the Finzi Room, and the collection catalogue is available online so, having decided that I wanted to check all the Hardy poetry volumes and some of the Hardy commentaries I emailed the Library and arranged a reading ticket for a couple of days. 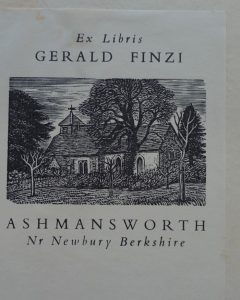 Having considered that Finzi might also be interested in Walt Whitman, on checking the catalogue I found that there were a significant number of volumes and arranged to see those too. Just back, I have to admit that it was fascinating holding the books which Finzi had held, read for pleasure and worked from, often containing his own unique book plate.

There were indeed hardly any helpful markings in the Hardy volumes, apart from ones that can be classified as an administrative record of poems set and which might be set. Perhaps not strange if he knew the poems inside out. But then in the main Whitman volume I found copious markings of lines, couplets, stanzas and whole poems: so, assuming – for the moment – 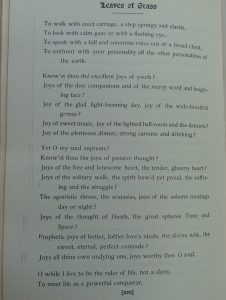 the markings to be Finzi’s, he was not averse to noting what resonated with him. Strange, however, was that the parts selected showed not just Whitman’s metaphysical work, but his deep love for the great American countryside and prairie and the people it supported. Raising more questions than it resolved, and probably leading me down some bye-ways that must not distract me from my immediate research, I feel that these markings may reflect what I have taken from Finzi’s Crees Lecture series, that at the heart of the work of a composer of songs is that (s)he will want to convey a particular sense of wonder or delight in some part of current civilisation about which they feel passionately.