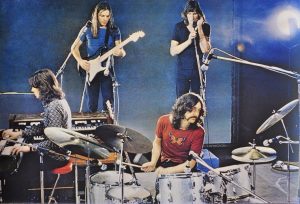 Pick of the Week by The Times, the landmark OU/BBC series ‘A History of Music and Technology’ is proving a real hit on BBC World Service Radio on Saturdays at 12.06 BST – or catch-up online here.

Pink Floyd’s Nick Mason is a warm and eloquent presenter mapping the history of music and technology in the company of legendary artists, producers, engineers and inventors.  The series shines a new light on the impact of innovations such as the synthesizer, the electric guitar, samplers and drum machines and the recording studio itself.

Technology has radically changed the way we make and listen to music – and this series also examines the way artists and industry insiders think technology might take music-making in the future.

The series was commissioned by Broadcast and Partnerships and is supported by FASS with particular relevance to BA (Hons) Music R25, and  BA (Hons) Arts and Humanities (Music) R14.

For more information about the impact of technology in music visit OpenLearn, where you can also listen to Pink Floyd’s Nick Mason in conversation with The Open University’s Sean Williams https://www.open.edu/openlearn/history-music-and-technology

This entry was posted in News, Research, Teaching. Bookmark the permalink.