Swinging into the Blitz

Posted on February 19, 2013 by Catherine Tackley

OU musicologist Catherine Tackley appeared on the BBC2/Culture Show documentary ‘Swinging into the Blitz’, a counterpart to the successful drama ‘Dancing on the Edge’. The documentary discussed Ken ‘Snakehips’ Johnson and Leslie Thompson’s bands of black British and West Indian musicians active in the UK during the 1930s and 40s. Catherine has written a chapter comparing this scene with that of jazz dance in the 1980s which will be published shortly in ‘Bodies of Sound’, and is currently working on a chapter about the aftermath of a World War Two bombing in which Johnson and one of his band members were killed, an incident which also split the band.

The documentary is repeated on Tuesday 19th February on BBC2 at 11:20pm and available until Wednesday 27th February 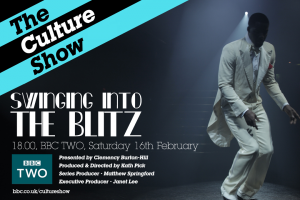