Posted on December 4, 2013 by Catherine Tackley

PhD student Andrew Gustar has had two articles published in prestigious journals. ‘The Life and Times of Black-Ey’d Susan: the Story of an English Ballad’, in Folk Music Journal Vol.10 No.4 2014, is based on the project he did at the end of A871. 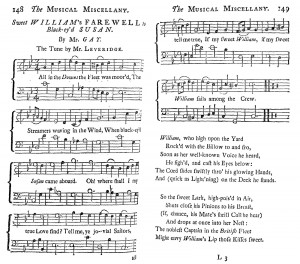 Abstract: John Gay’s nautical ballad ‘Sweet William’s Farewell to Black-Ey’d Susan’, published in 1719, was soon set to music by composers including Richard Leveridge, whose setting became the established version. The song remained popular, and inspired art, literature, and numerous musical arrangements and interpretations, with a modified version of the original tune becoming standard from the mid-nineteenth century. Appropriated as a traditional song on both sides of the Atlantic, it was encountered, in different versions, by folk song collectors, including Cecil Sharp. It continues to appear in song collections and as part of the performed repertoire.