The Impact of Nazism on Twentieth-Century Music 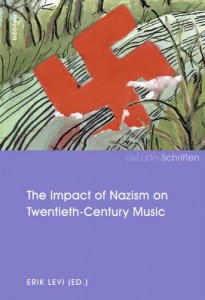 A new book has just been published by Böhlau Verlag entitled The Impact of Nazism on Twentieth-Century Music. Edited by Erik Levi, and arising from the proceedings of a 2008 conference in London, it features a chapter by OU Music Department lecturer Ben Winters called “Swearing an Oath: Korngold, Film and the Sound of Resistance?” that examines Korngold’s nostalgia for his Austrian homeland as expressed in the film scores he wrote during his years in Hollywood. In addition, there is a chapter by OU Associate Lecturer Malcolm Miller entitled “Music as Memory: Émigré composers in Britain and their wartime experiences.”

Other contributors to the book examine the work of exiled composers such as Weill, Weigl, Ullmann, Eisler, Achron, Goldschmidt, and Gál; while discussions of Nazi musical censorship in occupied Poland, and the relationship between Franco’s Spain and the Third Reich are just some of the many issues explored.