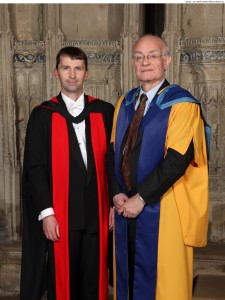 The composer and conductor John Rutter was made an Honorary Doctor of the Open University at a graduation ceremony in Ely Cathedral on 31 May.

Dr Rutter, who worked as a Lecturer in the Music Department for ten years in the 1970s and 1980s, spoke in his acceptance address of the crucial value of education to society, and warmly praised the Open University’s role in higher education since its foundation.

The Department was represented at the ceremony by Robert Samuels, seen here with John Rutter.

This entry was posted in News. Bookmark the permalink.