Patrick Wright on his new poetry collection Full Sight of Her

‘These are love poems at their most intense. Poems that celebrate the beloved as an artist with an alchemist’s imagination and bide closely to her through illness in such a deeply affecting way that as a reader, I felt her loss as a palpable ache. The backdrop of this collection is seaside clutter and the impossible metaphysics of plastic chairs, beachside cafes and a dark sea that threatens at the edge of everything to drown even daffodil light with its shade.’ 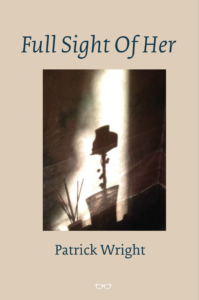 So writes Helen Ivory, in response to my debut poetry collection, Full Sight Of Her (Eyewear, 2020).

Many of these poems were written after my beloved’s passing, in June of 2017. In fact, most were written long before she was unwell. Now as I read them back, the poems, arranged roughly in chronological order, offer a narrative arc of foreshadowings, premonitions and omens; there are also call-backs to previous losses. I have been left wondering if we were precognitive in some way, and surreptitious knowledge of the future was playing itself out in a series of psychodramas. Later, I became aware of the Cassandra Complex: to be cursed with a vision of the future and to not be listened to. Mourning is foreseen as though a script was written. Clues of what is to come are there, in plain sight, though they cannot be easily voiced – as is the case in ‘What You Call Your “Winter Mode”’:

This collection provides only a perspectival and partial truth. The moments of bliss are usually not represented here. They were elsewhere, and joy had no reason to be recorded. The poems refer not to what’s noticed in the daylight, waking hours, rather to night thoughts and dark mirrors that betray what’s repressed; a compartmentalised darkness that allows the rest of life to be liveable. As John McAuliffe writes, ‘Patrick Wright’s moving, powerful Full Sight of Her takes its reader to fearful, anxious places, describing love and care which come under terrible pressure.  Wright’s bereaved, often bereft poems find words to protect the self, this lover who must become a “widower, prizing thumbnails” in the book’s densely visual poems, a man for whom even the “town scenery is full of tears”. Throughout, Wright finds forms which offer some protection for the bare feelings and memories the poems navigate, stanzas and shapes which mean that, as he writes, “I proceed on the basis of metaphor” even as he knows that he must “wear the scar.”’ Likewise, for Gail Ashton, ‘the sensual, anatomised poems … travel through interior and external landscapes, “the body’s catacombs”, to track apparitions, hospital wards, the night terrors of illness. These places where “the joke begins to wear itself thin” nevertheless brim with light, colour, scent. At once loss and redemption, its song of “I” to “you” is almost unbearably intimate and always extraordinary. In this heart-aching collection Wright is “faithful all along” to lyrical form and its “limitless repertoire of love.”’

The spaces depicted are fraught with introspection: they’re hotel rooms, bedrooms, waiting rooms; spaces of domestic anxiety and tension. Later poems address illness, loss, and grief more directly; they churn up past traumas and ask metaphysical questions – such as ‘The Waiting Room’:

Upstairs, she starts her chemo; down here it’s limbo.
Down here, an anteroom where outpatients mingle.
Everything tinged with the unreal:
from plasma screens to the walls and the vending machine –
its crisps and sweets glint with surplus significance
The nurse offers me watermelon, hands me Allsorts;
the nurse smiles like no angel, a smile unreadable.

Upstairs, a cannula’s attached to her arm. Assistants whisper
and carboplatin gets pumped through the heart’s blood
to zap the cells gone astray since surgery.
Here that’s about all I know, with uncertainty.
No one talks, not even couples beside each other
in the bucket chairs.
Though the ghosts in the empty ones talk. They talk to me.

The final few poems are perhaps the most harrowing: the speaker lost in a state of numbness and dissociation. ‘The End’, for instance, is replete with images of apocalypse and nihilism:

With the close of a hospice door, clunk of a saloon, tyres
on gravel: an ending if ever there was one. Let us slalom
round statues of Mary, grottos in grounds, funerary fetishes.

Let it end with handed-over possessions, towels, slippers,
photo off the wall (she never saw), smell of softened linens,
folded neatly with inventory, for no-one especially.

Ask for no heroes, villains, nick-of-time pliers on wires,
no H-bomb to defuse on the horizon. Ask for nothing
as the sun pops, extinguishes. Let it end as a balloon.

These are by no means ‘garden-variety elegies’ as Maggie Smith has observed in the Best New British and Irish Poets 2018 anthology. They reveal a range of psychological complexities – often directed to God or the nature of human suffering. Here I have tried to bear witness, stricken at times with guilt about potential voyeurism, to the limits of love and pain. This has been done, though, with the hope that the journey – my Via Dolorosa – will connect with readers or provide solace for those who’ve lived through similar grief.

As a whole, the collection is described well by Patricia McCarthy, who observes: ‘This powerfully moving, even harrowing, collection cuts to the very heart of loss. Yet it also celebrates a very special, strong, sensuous love that over-rides mental illness, an age-gap, and eventual physical illness, leading to the slow death of the beloved. These poems, while honouring his lover for her talent as an artist, her femininity and eccentricity, do not shy away from the graphic. They explore, analyse and sensitively articulate, through startling vivid images, often impressionistic and surreal, a whole world of time present and past, urban landscapes, seasides, claustrophobic interiors, ghosts, different kinds of sight and the liminal, questionable borders between dream and reality in a recognisable world of medicines, mobile phones and selfies. The haunting final elegy unites all the previous poems and demonstrates achingly “the price of love”. This is a poet to watch.’

Patrick Wright is an Associate Lecturer in English Literature and Creative Writing at the Open University.