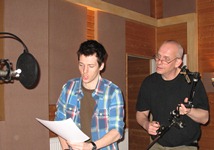 The story of Kirkpatrick Macmillan, the inventor of the pedal cycle, is well known in Dumfriesshire, but he doesn’t seem to get due credit elsewhere. Time, I thought, to put the record straight, and give him his own radio play.  The trouble was, the deeper I dug into the facts, the more the tale imploded. Romantic retellings have fudged the truth, and bike historians are at each others’ throats over who really invented the velocipede.

Luckily, the Radio 4 commissioners said ‘no biopics’. I read that as ‘artistic licence hereby granted’. Which was just as well, as it turned out… 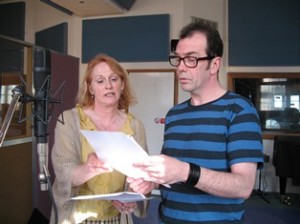 The story bones: Kirkpatrick’s invention, his journey to Glasgow, public humiliation and retreat to his village. Immediately, a few structural factors were apparent: he needed someone to talk to on the journey. I didn’t want him talking to himself, as that would make him too (a) mad or (b) solipsistic. It wouldn’t create much scope for action or narrative drive. So we gave him the Machine – the mechanical voice of the velocipede. The Machine has an evolutionary drive that pushes him on, and saves his life in the end. That’s the first joy of radio – that talking bikes are perfectly normal.

The second joy is the actors. We could only afford six, and this was a journey of encounters, so everyone brilliantly played four or five characters. Radio doubling is much trickier than on stage, as you don’t have visual cues. At one point I was concerned I had too many people, and plotted them on an Excel spreadsheet. Any characters not earning their keep were summarily dispatched, reassigned, or amalgamated. It’s harsh out there.

At one point I fancied a Hitchcockian cameo and took part in a crowd scene in the studio. This brought home a massive lesson about radio: if you can’t hear it, it isn’t there. There’s no point in nodding, shaking your fist, or even pointing a gun. Everything has to be vocalised. That includes reactions to unfolding events – so if you don’t have a line, you may need non-lexical sounds – grunts, laughter, uh-huh – which aren’t in the script. But microphones are incredibly intimidating and unforgiving. Every grunt is horribly magnified and feels just wrong. The cameo came out silent. But I was there – honest! And with a new appreciation of how difficult radio acting is.

Finally, radio joy three: action sequences. In my view, radio wins out over film every time. You can send a blacksmith hurtling down a hill cheaply, effectively and without putting the actor in mortal danger. I wanted to hear the exhilarating moment when the world’s very first cyclist bombs down a hill without any brakes. Here’s Scott Hoatson as Macmillan doing just that, urged on by John Kazek as the Machine:

Macmillan’s Marvellous Motion Machine by Jules Horne was directed by Rosie Kellagher for Catherine Bailey Limited and broadcast on BBC Radio 4 in May 2011. Jules teaches on A363 in Scotland.

This entry was posted in performance, plays, radio and tagged actors, doubling, sound. Bookmark the permalink.