My writing and publication record defines me principally as a fiction-writer and poet. 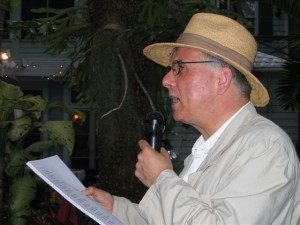 In the last couple of years, however, I have become increasingly interested in writing drama.  In the context of the OU, this may well have been through my exposure to dramatic techniques as a tutor on A363.  More generally, however, I felt the need to try and get at the essence of what characters were saying—or trying to avoid saying.  As a result, I wanted to set aside the often tyrannous ballyhoo of the fiction narrator, he or she who must be supplied with descriptive fodder: Thoughtfully, he turned from the window . . . no, no,  Lost in thought, he turned from the window . . . ok, how about Turning from the window, he . . . morphed into a hatrack?  Well, that’d bring all the realists up short . . . but I wanted to take a break from the demands of narrated fiction—and, come to that, the often hazier demands of poetry.

What characters say can be very interesting.  What they don’t want to say, even more so.  We live our lives surrounded by those who withhold, prevaricate, cover ignorance with bluster—think about the last time you tried to check your bank details over the phone.   So it was that I wrote a short play, FAQ, about the eternal, Manichean clash between motorist and car-park attendant, entirely in questions.  If statements or explanations keep open the lungs of dialogue, questions—especially when met with further questions—close them down.  After that, my interest expanded to a situation where, rather than blocking each other with questions, characters would talk up a storm—but in order to veil a secret they’ve never discussed and have no wish to now.  From this came another short play, When?  An older couple are about to take their third and youngest child to university.  Another milestone—not least in terms of offering them the latest opportunity to talk to her about something from the past, something delicate and painful that involves her.  Will they let the opportunity pass yet again?  Will they seize the opportunity?  Or has happenstance devised a way of making them face it?  We never learn what the secret is.  My main interest was in watching the couple . . . well, dealing with not dealing with it.

Through a play reading session for Script (now defunct, sadly), my work got the attention of Margaret Jackman, director and actress (The Royal, Holby City, Candy Cabs), who also writes as Margaret Manuell.  Through her good offices, an evening of three plays was devised: FAQ, When and Service, one of her own plays, set in a nursing home and similarly focused on how people swerve away from truths.  Triplet, the evening was called, and it was staged in Staffordshire and at the Blue Orange Theatre, Birmingham, in May 2011.  The cast, including Margaret herself, Alison Belbin (often in The Archers) and Philip Jennings created the kind of magic that you hope for with scripts.  They lifted the words off the page and took them into that other world, the dramatic world of action, gesture, inflection—and fear of secrets.

Other productions of Triplet are being planned for later in the year. 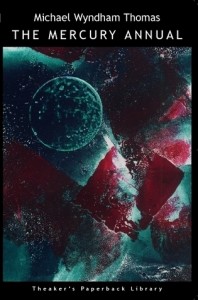 In the meantime, I’m back dishing up words for a greedy narrator (in the sequel to my 2009 novel, The Mercury Annual) and also, slowly, putting together a new poetry collection.  I’d like to think that these projects have gained an extra edge, fresh vitality, from my excursions into script-writing.  Even as I write this, I hear Mick from Pinter’s The Caretaker, saying ‘Now then, son, don’t get perky, don’t get perky.’  But I hope it’s true.