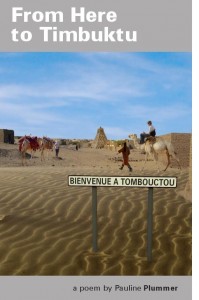 the publishers of Pauline’s new verse novel, describe it as follows: ‘ The fabled city of Timbuktu, once the dazzling capital of the Songhay empire, is now just another impoverished desert town on the tourist trail. From Here to Timbuktu follows the fortunes of a group of tourists as they make their way by 4×4 and pinasse (boat) across the Mali desert. Like Chaucer’s pilgrims, these travellers pass the time bickering, gossiping, flirting and falling out, eventually sharing the stories of their lives with humour and pathos. Written in Chaucer’s rime royal, From Here to Timbuktu is a book about Third World poverty and First World consumption. It’s a travelogue, a satire, an epic poem, and a four-wheel drive journey across the savannah plain.’

Pauline explains: ‘The idea for the long narrative poem From Here to Timbuktu came from taking such a holiday myself!  When I came back, thinking about the experience, Canterbury Tales came to mind, in the way people behaved during the journey – bickering, flirting, getting one up on each other!  I wondered if I could do something with this m aterial and as I reread the Prologue and thought I could set myself a challenge of writing about the journey in Chaucer’s rhyme royale.  In my other writing I mix free/open forms with writing in form so I decided to stick with the form and see what happened. I began with a couple of characters (fictional!) and then they gradually grew in number and type.  They began flirting and quarrelling with each other and the story element took off from there.   I worked on it, off and on, over about 7 years, nearly abandoning it several times but in the end my stubbornness insisted on an end.    Themes emerged, almost despite myself.  I realise now, rereading it over and over during the proof reading process, how much is there about looking for meaning in life from the characters’ point of view.’

This entry was posted in poetry, travel writing and tagged narrative, rime royale. Bookmark the permalink.