I am pleased to announce that my debut novel Alarm Girl is published in August 2014.

The novel is set in South Africa and is partly narrated by eleven-year old Indy, who is visiting her father there for the first time since her mother’s death. The ‘otherness’ of Africa for Indy – the heat she finds uncomfortable, the landscape she doesn’t recognise, the encounters with people she doesn’t know – all help to create a sense of the foreign state that is a child’s motherless world. 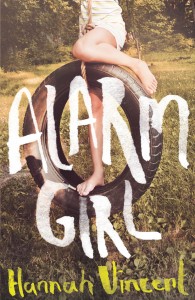 I had the idea for the novel when I was travelling in Africa nearly twenty years ago so it’s been a long time coming! I was a playwright for many years and wrote a version of the story as a play firstly but it didn’t quite work so I ‘drawered’ it. After having babies and enjoying a stint as a television scripteditor I turned to prose writing and revisited the material.

In spite of what anybody has to say about the value or lack of value in Creative Writing courses, my MA study in Creative Writing at Kingston University helped me improve my writing (Creative Writing students note that it also improved through commitment, open mindedness and a willingness to learn on my part!). Encouraging comments from tutors and fellow writing-workshoppers were instrumental in getting my work to a publishable standard and it’s why I am so happy to teach on the Open University’s Advanced Creative Writing Course (A363), which encourages writers to share work and feedback.

Coming to prose from a drama background, I am interested in what elements a writer can transfer between the two mediums, which is precisely what A363 teaches. Drawing on my A363 teaching practice I have also written a mixed mode piece which experiments with movement between prose, drama and poetry (‘Human Geology’ published in a Special Issue of American British & Canadian Studies volume 20, June 2013).

This summer also saw the transmission of my first radio play Come to Grief, which was broadcast as an Afternoon Play on BBC 4 on the 15th July 2014 (at the time of writing available on i-player for 4 weeks…). Again, this work emerged out of my interest in how a different form can affect material – Come to Grief started life as a stage play, produced at the Royal National Theatre Studio in the mid ‘90s but takes on a new radiophonic identity in its current incarnation.

This entry was posted in novels, plays, radio and tagged experimental, mixed mode. Bookmark the permalink.