For much of my life, I had absolutely no idea that my grandfather, Michael McCann, had fought in the First World War. I grew up with the image of him as the archetypal Irish nationalist hero of the first decades of the twentieth century. A brooding photograph of him in Free State Army uniform and flat-topped army cap dominated the dresser in my mother’s kitchen; stories of his escapades in the War of Independence and the Civil War were an integral part of family lore. But there was no mention of the earlier conflict my grandfather was involved in, as a Lance Corporal for the Royal Munster Fusiliers. His experience, like that of so many of the hundreds of thousands of Irishmen who fought in World War I, had been quietly obliterated from the official narrative. There was no room in the nationalist mythology for any stories about those who fought for other causes.

When I began to research my grandfather’s life in greater detail, in preparation for a memoir I hoped to write about him, I first turned to the obvious sources to flesh out the information I already had about his campaigns in the War of Independence and the Civil War. The Irish Military Archives were very helpful in finding Witness Statements that mentioned my grandfather, and his role in the various arson attacks in the North East of England that led to his imprisonment in Parkhurst in 1920. Newspaper cuttings testified to his involvement in ambushes during the Irish Civil War. The Garda Archives were able to provide me with an A4 sheet detailing his subsequent career as a Detective Inspector with the newly established Garda Siochána (Police Force). 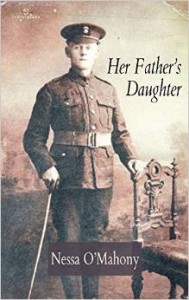 It was when I trawling through genealogy websites to see if I could get more information about my grandfather’s family, who were small farmers in a townland called Derryronane in County Mayo, that the greatest surprise was uncovered. By this stage I knew he’d fought in the Great War – my uncle Liam had given me the one artefact linking my grandfather to the British Army: his soldier’s pay-book and wallet. But it wasn’t until I visited the genealogy website, and came across a posting from a complete stranger who was also seeking information about the Derryronane McCanns, that I got the visual evidence. The stranger turned out to be my second cousin – a direct descendant of my grandfather’s brother, John – and after we had exchanged emails he offered to send me various family photos.

When the email arrived with the PDF attachment, I casually scrolled through the old black and white photos of people who were vaguely familiar and others who were completely new to me. Then I came across one that brought me up short. A young man in British Army uniform poses with ceremonial cane, right-hand resting on the back of a tall, mahogany and leather chair. The pale eyes stare out quizzically with an expression I’ve often seen on the face of my elder brother, Tom. I knew, without having to be told, that this was a photograph of my grandfather, Michael McCann.

My mother, Mai, who is a marvellous raconteur, and who, at the age of 85, has an extraordinary memory for events that happened decades ago, had never seen that photograph, nor had any of her surviving siblings. I can only conclude that he sent it as a postcard to his family back on the farm in Derryronane, and that it was kept in his brother’s family and taken to the UK when a niece emigrated there sometime in the 1940s. I can’t imagine that it was ever displayed proudly on a mantelpiece; in post-independent Ireland, few were prepared to speak openly about family members who had fought for King and Country. So much had happened in the intervening years – a country divided by traumatic Civil War and attempting to come to terms with all the violence and petty hatreds that conflict had unleashed. Small wonder they adopted the classic Irish strategy of ‘whatever you say, say nothing.’

My grandfather must have seen extraordinary things in his early life but remained reticent throughout his later years. The various injuries (shrapnel wounds to the leg and wrist, a toe shot off) were the physical manifestation but there was little evidence of the mental suffering. One can only imagine the sort of post-traumatic stress he would have suffered, and was forced to contain within himself.

That tension between the public and the private expressions of identity captured my imagination; rather than memoir, I began to think about poems that might explore that tension. That was the genesis of this new collection of poems Her Father’s Daughter, which presents two parallel sequences of poems, one relating to my relationship with my own father, who died from a long illness during the making of the book; the second exploring the life of my grandfather, whose story slowly emerges through my mother’s memories, and my own research. I was delighted when my publisher agreed to put Granddad’s World War I photo on the cover.

I’ve no idea what Michael McCann would make of the book: puzzlement, perhaps, or annoyance that anyone was making much of what he himself had discounted or kept to himself. But I do hope that he might understand the motivation of the writer: to tell the story of a heroism typical of his generation, a heroism in danger of being forgotten once this decade of commemoration concludes.

Her Father’s Daughter is published by Salmon Poetry (Co. Clare). Further information is available on http://www.salmonpoetry.com/details.php?ID=344&a=12

This entry was posted in memoir, poetry and tagged family history, photos. Bookmark the permalink.