In May 2013 I found myself coping with depression. Through the fog I reasoned that if I felt this bad, it would be difficult to feel any worse so why not take a risk? I had repeatedly tried to have a poetry collection published; if I approached a publisher now I would hardly feel the sting of rejection when it came. It would only be the cherry topping of pique on my black forest gateau of despair. I sent some of my poems to Elliot Robinson at Playdead Press. He agreed to publish my book. Some people, I thought morosely, would do anything to spite me. 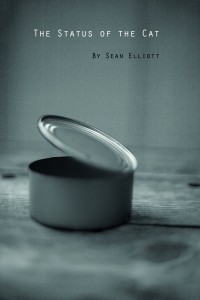 Putting together a poetry collection is like arranging a mosaic. You are working with existing pieces rather than drafting something new. I had roughly a hundred published poems from twenty years of writing. The poems seemed to fall into several groups. Places were important and indirectly established a chronology: there were poems about Dawlish, the seaside town in Devon where I grew up; I’d moved to London in search of a career; my wife is German and several of my poems were about my growing love of the German landscape and culture; in recent years we had bought a house in Margate, another seaside town but a far more impoverished one than Dawlish.

Alongside the poems involving places, there were recurrent themes. Several poems were about the theatre (I had worked as a theatre usher for both the Royal Shakespeare Company and the National Theatre). There were poems about the minor dishonesties of social behaviour, inspired by Thomas Hardy’s Satires of Circumstance (1914), which I hoped were witty. There were poems about love, depression and paintings. I excluded about twenty poems because they duplicated things that were said better in another place, or they had lines I no longer liked. Initially, I planned to end the collection with the sequence of love poems as a final ‘cry from the heart’. I’m glad I changed my mind and put the love poems in the middle; they now seem like an important part of the whole rather than a wayward digression in the last few pages or a makeweight brought in to plump out an otherwise skinny book.

My title, The Status of the Cat, came from a section of poems involving cats. I am not a cat fanatic, likely to appear in future author photos clutching an embarrassed feline, but my book is about survival; cats proverbially have nine lives and always lands on his feet, they make good role models. The book came out in February 2014. It continues to prowl the bookshops while I have moved on to the next of my nine lives.

This entry was posted in poetry and tagged autobiographical. Bookmark the permalink.