Come To Pass – some reflections on group work

This collection, recently published by Oversteps Books, is the second in which I have arranged poems by sub-groups. In earlier collections, I think I must have had some sense of variation in subject or tone, so I can’t say that I just slung them in like packages in a delivery van. There was, however, no overt organising principle. Perhaps I had in mind Ringo Starr’s recollections of recording Sgt Pepper’s Lonely Hearts Club Band, given in an interview for the Beatles’ Anthology documentary. They started, he said, with a kind of military theme in mind for the album, which gave them the opening song, its reprise, and—via the persona of Billy Shears—‘With A Little Help From My Friends.’ But after that, ‘We said stuff it, let’s just do tracks.’

I’d always liked the idea of just doing tracks in poetry collections: letting different kinds of poems jostle each other and jump out at the reader in haphazardly contrasting ways. But I was aware that, for most poets, having a care for organisation was more important than my cavalier ‘herd ‘em up, move ‘em out’ approach suggested. In one interview, Philip Larkin noted that he saw his collections as akin to an evening at the music-hall: the clowns, the serious tenor, the dancing girls, the magician. 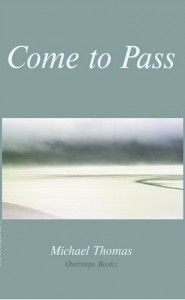 So with my last collection, The Girl from Midfoxfields, and this one, Come To Pass, I moved towards sub-groupings and saw the advantages that this could have. My first impulse was a simple one: put similarly-themed poems together so they have a bit of company. From this act of cod-altruism, however, grew the realisation that grouping poems might enable me to see them in a new way—possibly even see meanings which I had not intended when I first wrote them (thus sparing me, perhaps, the old experience of trying to catch up with someone else’s interpretation).

In Come To Pass, the sub-groups are ‘Black Countries’, ‘Calls and Responses’, ‘The Gather-man’, ‘Shelter Poems’ and ‘Exits.’ Only in ‘The Gather-man’ were the poems written on a unifying theme, the notion of a character who prepares the soon-to-die. The rest had been written at different times and, while I could see that I was moving back to subject A or B with this or that one, I didn’t immediately think ‘Ah, that’s another for a group.’ The headings actually came afterwards, but it was interesting to see how naturally different poems fell under them. ‘Calls and Responses’ turned out to be a home for poems of greater or lesser spirituality, while ‘Exits’ showed me how many poems I had written on the theme of ‘goodbye’—from ‘I Didn’t Mean It,’ about a domestic row, to ‘Union Junction’, which ends with a boy watching a swan sail away beneath a canal bridge:

For this collection and the last, then, subgrouping has been the way to go. Whether I’ll continue it, I’m not sure, but I don’t think I’ll revert to the random business of ‘doing tracks.’ I’m not sure I’ll write anything else, but then, perhaps you never are after you’ve finished something. Anyway, I take heart from the words that Edward Bond gives Ben Jonson in Bingo, his 1973 play about Shakespeare’s final days in Stratford. Jonson is on his way north to torment Drummond of Hawthornden and stops off to see ‘sweet William’, as he calls him, and find out what he’s writing now. Nothing, insists Shakespeare:

Jonson: Why not?
Shakespeare: Nothing to say.
Jonson: Doesn’t stop others.

This entry was posted in poetry and tagged theme. Bookmark the permalink.