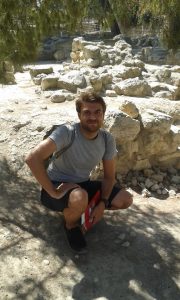 We’re delighted to share this post by one of our current MA students – Ben Cassell – who has just published his first article on The Monumental Configuration of Athenian Temporality: Space, Identity and Mnemonic Trajectories of the Periklean Building Programme (full text available online, open access). In this post, Ben writes about his study journey with the Open University, and his particular interest in the academic field of Memory Studies. Congratulations on the publication of your article, Ben!

“Entering my fifth year of studying Classics with the Open University has, for me, found an appropriate celebration in my having been published for the first time. This is something I consider an important personal achievement, that I know would never have been possible without my time at the University.

In relative terms I recognize my coming to Classics late. This is not to say that I ever had a disinterest in antiquity, rather it was the medieval period that always held my most fervent attention. Yet come to Classics I did, as many of us can claim I’m sure, through Homer, Euripides and Plato, and my decision to study Classics with the Open University was born out of a genuine desire to know the contexts and audiences that produced and consumed these great literary works. I studied for the BA in Classical Studies full time, with two modules in tandem, and moved straight into the MA in October 2017. I’ve done this while running my own business, and though of course both life and study have produced challenges, the time I have thus far spent studying Classics with the Open University has been the most genuinely rewarding of my life. I have made friends I know I will keep for life, and developed a genuine passion for academia.

Over this time, I have developed a keen interest in the application of Memory Studies to ancient contexts, in order to study aspects of social history, identity and power relations. I am fascinated by the methods and actions that facilitated the identities and self-perceptions that made up the cultures of Classical antiquity, and the role of memory is central to all my research. This also, naturally, includes an interest in the manner in which time itself was both constructed and experienced by differing cultural groups in antiquity. Major inspiration for me has come from the works of Aleida and Jan Assmann, especially in in their illustrating the applicability of Memory Studies to the study of ancient contexts, whilst Archaic and Classical Athens have become the focus of my research. It is on this subject that I decided to compose an entry into the Kassman Memorial Essay Prize run by the Open University in 2017, looking at the mnemonic potential exhibited in the Periklean building programme. This in turn underwent drastic expansion, including the consideration of spatial relationships and phenomenological experience, to become the first draft of my now published article last September.

The article was itself motivated by what I perceive as being an underdeveloped approach to the socio-cultural context of Athens: an analysis of the modes, means and arenas of cultural remembering, the essential mechanism for cultivating group identities, in this period. The process of writing was itself a genuine learning curve, with the first round of peer reviews being both exhilarating and imposing. I also enjoyed maintaining a working relationship with the editorial staff over the course of what became several months. Being published marks a truly significant turning point for me both as a person and a Classicist, and has solidified a theoretical direction for my future research. Indeed, for me any study of antiquity is now framed by memory. After completing my MA with the Open University I aim to complete my PhD thesis on the mnemonic trajectories afforded by Athenian ritual and space, and my proposal is presently under consideration.

While I may have come late to field, my future is in Classics. My time with the Open University has cultivated what was an interest into a passion, a lifestyle even, and my intention is use my MA and future PhD qualifications in pursuing a career in academia. My future research will include an examination of the role of Theseus in the cultural memory and temporality of Classical Athens, including his overt presence in the ritualistic landscape. I shall be discussing the general content of the research that became my article at University of the City of London’s Lyceum event in March, and the article itself can be found at http://helenskestudije.me/ojs/index.php/jhs/issue/view/2

I would like to thank all the members of the Department of Classics at the Open University for generating course material, events and an atmosphere that has truly engendered my love of Classics, and also, every one of my past and present tutors, without whose support this small achievement of mine would not have been possible.”