At a poet’s grave in a country churchyard 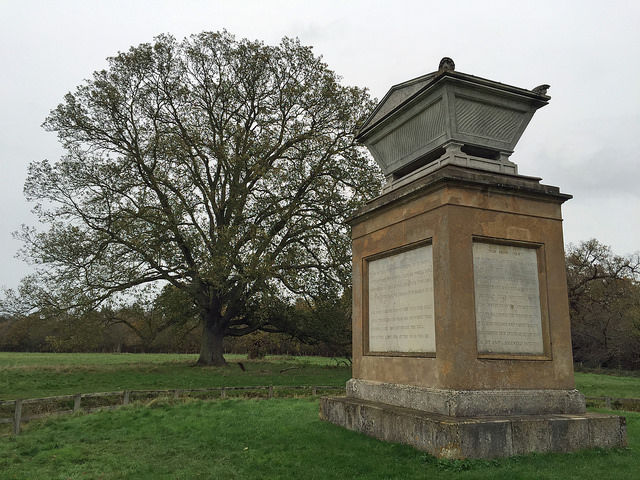 Today’s adventure took me to Stoke Poges, to what is quite possibly the most famous churchyard in Britain. And why is it so famous, you ask? Well, this is the ‘country churchyard’ which Thomas Gray wrote about in his Elegy Written in a Country Churchyard of 1751. It’s also the churchyard in which the poet himself is buried.

Across from the brick table-tomb of Dorothy Gray, Thomas’s mother, there is a small plaque on the wall of the church, dated 1799, which reads: ‘Opposite to this stone in the same tomb upon which he has so feelingly recorded his grief at the loss of a beloved parent, are deposited the remains of Thomas Gray, the author of the Elegy Written in a Country Churchyard, etc. He was buried August 6, 1771.’ Beyond the churchyard is a little path marked with a National Trust sign.  If you follow it, as I did, round though the scrubby bushes and spindly trees, you are confronted by an enormous, late eighteenth-century monument, some twenty feet high. Each of its four sides carries an inscription. One side quotes from Gray’s Ode on a Distant Prospect of Eton College, two more sides carry lengthy quotations from Elegy Written in a Country Churchyard, and the fourth announces:

This Monument, in honour of

Celebrated by that great lyric and Elegaic Poet.

And lies unnoted in the adjoining church-yard,

Under the Tomb-stone on which he piously

And pathetically recorded the interment

Of his Aunt and lamented Mother.

This monument, it turns out was erected in 1799 by John Penn, descendant of the William Penn who founded Pennsylvania. It was included as part of a general renovation of his property, which included re-organising the church, demolishing the old manor house, and building a new and imposing  residence. The intention was to embellish the parkland view from Stoke Park.

This is neither the only, nor the first monument erected to the memory of Thomas Gray. A memorial to Gray erected in 1778 sits beneath John Milton’s statue in Poet’s Corner, Westminster Abbey. But what Stoke Poges presents  is the family grave of a poet made over into a Romantic locality It converted Gray from a non-localised ‘Poet’ of the Enlightenment, into someone  His grave was re-designed  as the grave of the author of the Elegy in a Country Churchyard. It represented the English poet at one with his native English soil.

So, aside from the mud still clinging to my boots, what did I bring away with me from this trip? Two things mainly. First, the shift from literary tourism as paying public homage, to literary tourism as privatised sentimental exchange, and second, the power of an individual text, in this instance Gray’s Elegy, to   prompt such tourism.