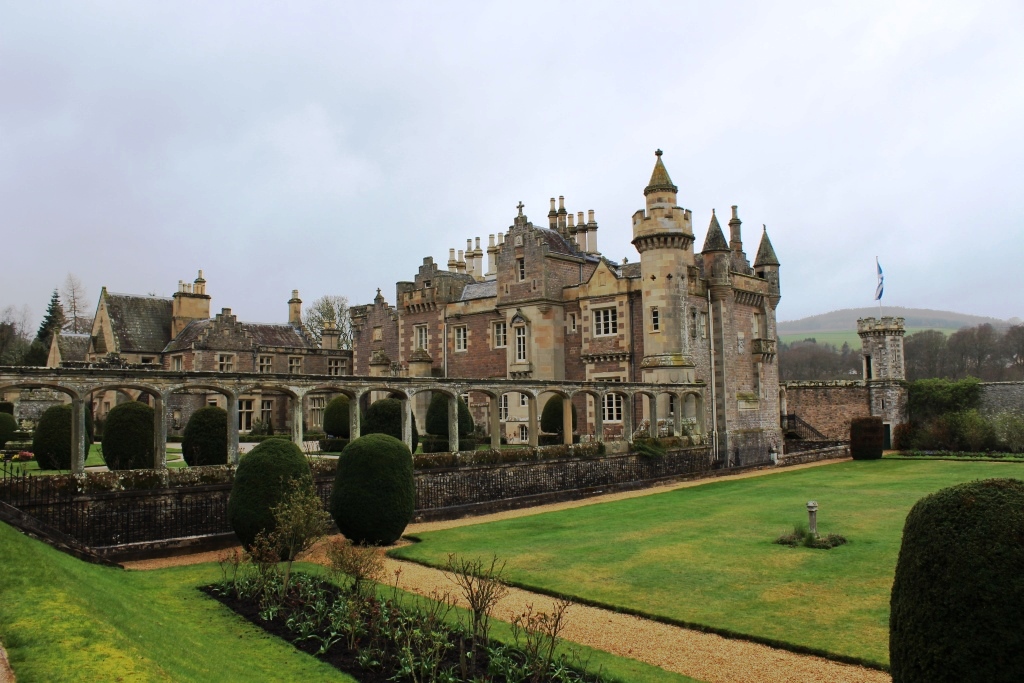 A writer’s birthplace like that of Shakespeare’s is of course in some sense a ‘writer’s house’. But it is almost never the house in which the writing has actually been done, the workshop of genius. One house that does speak eloquently of the writer’s labour, however, is Abbotsford, the most famous of the many homes of Sir Walter Scott, poet, novelist, and a nineteenth century national treasure.

Recently Abbotsford has been carefully and expensively redisplayed, to excellent effect. I went up in 2017 and admired the way that the curators had chosen to display all sorts of objects in an entry exhibition, while then showing the house as it might have been when Scott was in his element entertaining his many visitors. But when I visited Abbotsford in 2003, before the present redisplay, the house retained for the most part its Victorian aesthetic; laid out explicitly as a shrine to Scott, it was still studded with rather dismaying relics which he himself would have mightily relished – a lock of hair, a walking-stick, the sofa on which he died, and worst of all, embalmed in a glass case, ‘the last suit of clothes Sir Walter Scott wore’, complete with shoes, gloves, hat, chain, stick, and gaiters. Indeed the whole house was displayed pretty much as it had been ever since the death of Sir Walter Scott. It spoke of the novelist dead in the service of the national literature. The study was animated by representation and relic of Scott: the first in the shape of a bronze cast of Scott’s head taken after his death placed in the small turret room which he called his ‘Speak-a-bit’, the second a lock of Scott’s hair. Personal items were used to give physical scale and to create a coming of age narrative: the beginning of the narrative was indicated by Scott’s baby cutlery, the end by his spectacles lying on the desk.

Although relics of authors had been treasured before the 1830s, they had not been displayed as part of a domestic montage before, nor indeed in such numbers. Arranged this way, they were no longer individual relics, near-souvenirs, but made up a shadowy outline of the author’s domestic and physical life. At the core of the house, in the study,  sat the pieces of furniture that dramatise the writer’s labour: the ‘Sheraton writing table and chair used by Sir Walter Scott when writing his novels, in 39 Castle Street, Edinburgh’ and the very desk and chair in which Scott and fellow authors Thomas Dibdin and Nathaniel Hawthorne sat. Sir Walter Scott’s writing desk, complete with cheque book, spectacles, paper knife, and seals was captioned as the desk ‘at which the later Novels were written and where he laboured to pay off the Debt, incurred 1826, through the firms of Messrs Constable and Ballantyne’. This references the Victorian notion of Scott as both a national writer of a genius to rival that of Shakespeare but also as a moral exemplar, a man who worked himself to death to pay off his creditors after the collapse of the publishing house with which he was associated. Abbotsford is of great importance in the development of the writer’s house as a tourist destination  because it was the first house consciously designed by a writer as a realisation of his literary aesthetic  and to display the income and status achieved from authorship; it was, moreover, the first house shown primarily as the site of the writer’s work It acted as a fitting frame for the identity and literary achievements of both the ‘Minstrel of the North’ and the ‘Author of Waverley’, and   was visited by admirers in Scott’s lifetime as well as after. As such, it became the model for many other nineteenth-century writers’ own houses, and for the modes in which many of them would eventually become museums. The model of tourism that is associated with Abbotsford is the visit to the living adult author armed with a letter of introduction, with the delightful prospect of having them as host, companion and tour guide of their home and ‘haunts’. The act of viewing the house is accordingly an imaginative effort to bring the absent author once more to life. This is still very much the case today; if you take the audio-tour, you will find Scott’s voice in your ear.