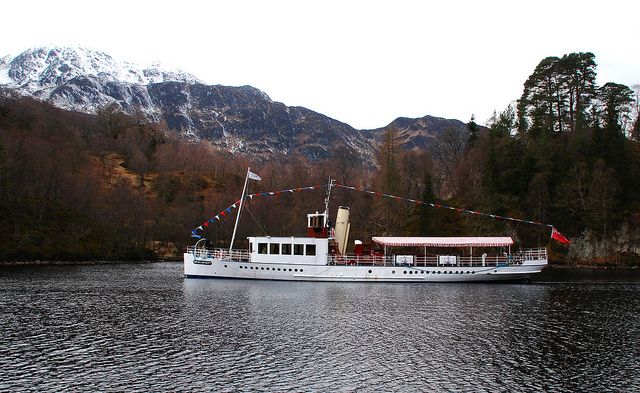 Off to Loch Katrine, in the footsteps, this time, of Scott. Scott was a great one for going to beautiful places, collecting quaint stories about them, and weaving them up into best-selling romances. The consequence was that his readers would set off to have the same experience, romancing the landscape with the aid of his poetic imagination, carefully memorized, or extracted conveniently into a guidebook. This sort of tourism is mostly not tied very tightly to the author; it’s fun if you know the story of how Scott went as a tourist himself to the famous beauty-spot of the defile of the Trossachs (famous, I think because unlike the rest of the Highlands, it provides a habitat for a number of tall, deciduous trees) which leads to a beautiful loch running roughly northwards and beautified by a small island, but it’s not essential to the literary tourist experience.

It was the unparalleled success of Walter Scott’s The Lady of the Lake in 1810 that marked the beginning of tourist interest in landscapes and locations associated with Scott’s works.  To this day, the little town of Callander, gateway to the Trossachs, boasts a Waverley Hotel, an Abbotsford Lodge, and so on, in homage to the writer who brought it so much profit. Nowadays not much survives of this great Victorian enthusiasm. The steamer named the ‘Sir Walter Scott’, built in the 1890s, still chugs across Loch Katrine in the summer carrying tourists from the Trossachs up to Stronachlar. Rags of quotation from Scott’s poems describing the landscape appear on plaques which have been installed in front of all the best views, and the heroic concrete stag couched as the foreground of the magnificent view from the turreted Trossachs Hotel is captioned with Scott’s famous opening lines, ‘The stag at eve had drunk his fill/ Where danced the moon on Monan’s rill’. In every direction, including Victoria’s Royal Cottage, are outcrops of hunting lodges and holiday villas built of the fabric of Abbotsfordian fantasy, and it is just possible to catch the sound of the faint whisk of phantom crinolines along the winding paths criss-crossed with trickling water and upholstered with moss, ferns, and rhododendrons, in between the whizzing wheels of today’s mountain-bike. But on the whole, Victorian romance seems to have faded along with the mass-appeal of The Lady of the Lake itself. Ungratefully, the gift-shop on the pier, though well-stocked with other books, was selling no Scott whatsoever when I visited. Visitors and proprietor alike appeared unaware that even the names of Loch Katrine and its presiding mountain Ben A’an owe their form to Scott’s metrical necessities, and that the English place-names blandly recorded on the Ordnance Survey map to this day – Ellen’s Isle, the Silver Strand – derive from Scott’s poem rather than ancient usage. The Trossachs has lapsed back from poetic ground into mere picturesqueness.

The story of the rise of tourism associated with The Lady of the Lake is in miniature the story of a changing relationship of literary tourist to landscape. The eighteenth-century appreciation of the picturesque in scenery was overlaid by the pleasures of sentimental narrative mixed with historical romance. Under Scott’s influence, the Scottish landscape was newly filled with poetic and historic associations, associations which the highly-tuned sentimental traveller would now be expected to have vibrating at his or her nerve-endings. Victorians now saw the landscape associatively, in terms of historical narrative, in a spirit of romantic documentary. Historical anecdote and folk tradition entwined charmingly with enchanting creatures of imagination. Travel within such a landscape now promised an escape into the romance of the past, and with it the possibility of reinvigorating everyday modern existence. To step out of a carriage in the Trossachs was to breathe in a heady gasp of the air of the past. Breeches melted away in imagination into kilts, muslins into charming plaids. For a whole century or more, despite reality — the mines, the lime-works, the marble quarry, the Chinese bridge in the grounds of the house at the west end of the lake, Duneira — it would be almost impossible and entirely undesirable to see the region of Loch Katrine in any other way than, to quote James Lumsden’s Guide to the Romantic Scenery of Loch Lomond (1831), as ‘a country which [Scott’s] genius has made classic.’