We are making the best of that perennial curse, a daughter’s school project, by setting off into Dorset on a day-trip in search of Hardy’s Wessex, armed with a camera and dog-eared copies of Tess of the d’Urbervilles and The Mayor of Casterbridge. We’re a hundred years and more too late for this to be a pioneering idea. In 1905 a little guidebook to Dorchester was already paying homage to the help that Hardy was providing to local tourism:

From material that might have seemed at first sight unpromising, he has woven a series of great works of fiction …. he has painted Dorset with an incomparable art and a poet’s soul, and revealed to us in its downs and heaths and woods, aye, and its towns and villages, its past and present, in a new and fascinating light. 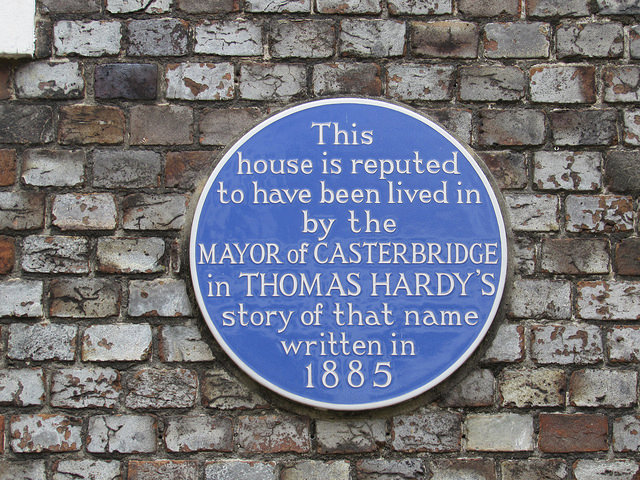 In the second half of the nineteenth century Dorset was an agricultural backwater. Its mostly understated landscape, with little claim to the picturesque, remote from the centres of power and almost entirely bypassed by the romance of history, had attracted little tourist interest. Dorchester itself, once a Roman camp, and later an important stop on the coaching routes, had been furnished with railways to the north, rendering the main road that traced the course of the coast from east to west unnecessary.

In the early years of the new century the town’s main claim to fame and importance would therefore be as a centre out from which tourists made eager excursions to view landscapes and locations that they had previously only experienced in the form of words. We’re startled by coming across a modern version of this tourist sensibility, a plaque on the frontage of Barclays Bank that reads:

to have been lived in

story of that name

This is a blue plaque, sharing the format conventionally used to memorialise the places where real people once really lived. But this one memorialises a fictional location within a real site, and is close to unconcerned with distinguishing between fact and fiction. As such, it says a lot about the central ideas behind the construction of ‘Hardy’s Wessex’.

Hardy typically took real places – roads, heaths, rivers, valleys, hills, forts, castles, towns, villages, and houses – and, leaving them pretty much in the same geographical situation, gave them believable new names, often made up of other place-names in the district. Consonant with this practice, the plaque on Barclays overlays the physical reality of Dorchester with the imagined physical reality of Casterbridge: the fictional town of Hardy’s invention. In rooting his fiction in an accurate location and yet making that location fictional by renaming it, Hardy created a region in which the real, although still there, has less hold upon the tourist’s imagination than the fictional world that replaces it. It was the gradual development of the idea of ‘Wessex’ as embracing all these places, as existing in actuality, and, eventually, as exceeding all the novels put together, that would put ‘Hardy’s Wessex’ first onto a famous map of its own, and then onto the tourist map.