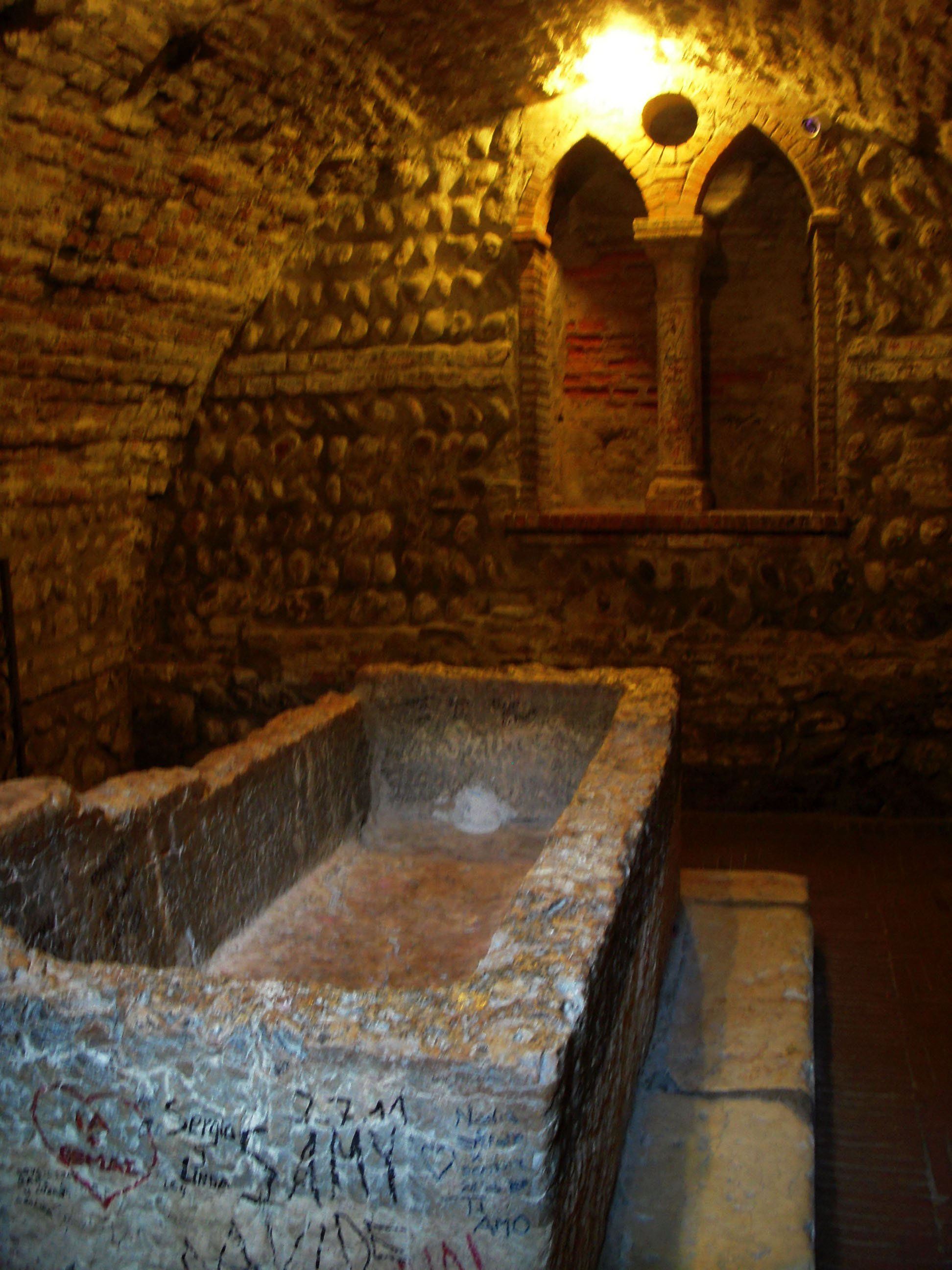 Shakespeare’s Verona is a true curiosity for the literary tourist because it is so much the product of wishful thinking. It is extremely unlikely (despite some pleasant speculation) that Shakespeare ever went to Italy; there is certainly no evidence to suggest it, other than Shakespeare’s choice to set certain plays in Italy, amongst them Romeo and Juliet (c. 1594-6), which takes place of course in Verona. Shakespeare’s immediate source for the story was Arthur Brooke’s popular and much-reprinted poem The Tragicall Historye of Romeus and Juliet (1562), a translation of the French version of a well-known story which originated in Italian versions written in the 1530s by Luigi da Porta and in the 1550s by Matteo Bandello. The invention of Shakespeare’s Verona as a tourist site happens two hundred years later, around the turn of the eighteenth and nineteenth centuries. It is inspired by the desire to seek out traces of the supposedly historical Juliet, in much the same way as tourists began to search of traces of Rousseau’s fictional heroine Julie in a real landscape around the same time. But, surprisingly, the story of how the real city of Verona became branded to Shakespeare’s play has just as much to do with the fortunes and the fall of Napoleon.

Verona is a very pretty city, and this is just as well, since nowadays it makes much of itself as a place to celebrate romantic love. The really very unsatisfactory outcome of Romeo and Juliet’s affair has not apparently registered with the many young lovers who attach love-locks to the bridges, stick multi-coloured blobs of chewing-gum engraved with their intertwined initials in biro to the walls of ‘Juliet’s house’, pose for pictures on ‘Juliet’s balcony’, write letters asking for relationship advice to Juliet (all answered by a team of volunteers), fondle the breast of the statue of Juliet for good luck, and visit, or even get married at ‘Juliet’s tomb’. And ‘Juliet’s tomb’ is where Shakespeare’s Verona got started. It’s in the grounds of a convent: at present, you walk through an annex exhibition full of mostly horrible art depicting Juliet until you are finally let out into the garden, down some stairs (avoiding the rather baleful eye of a Shakespeare bust), and so into a crypt where you find what is plainly a Roman sarcophagus standing peacefully on a tiled floor.

‘Juliet’s tomb’ first appears sometime soon after Waterloo. As the case of Rousseau suggests, the late eighteenth century had been characterised by a strengthening desire to give fiction material reality through verifying landscapes and locations and travelling to them. There are plenty of other examples of this: much sought-after celebrity tombs at the time included the lost tomb of Petrarch’s crush, Laura. For most of the eighteenth century it was accepted that Juliet or rather, Giulietta Cappelletti, had been a real person who was probably buried in Verona, but it was equally reckoned that the tomb had long been lost. So it’s a bit of a surprise to find Byron writing a letter about visiting her tomb on his way to Venice in 1816.

Given that English enthusiasm for their newly nationalised bard would likely have been the driving force behind the production of this tomb from thin air, and that English travel within continental Europe had been restricted by war until 1815, it seems probable that Byron saw it fairly early in its existence as Juliet’s tomb. Another early glimpse is provided by the poet Samuel Rogers, who along with other aristocratic sight-seers had hurried over onto the continent during the short-lived peace of 1814 and had travelled down through Switzerland to northern Italy. Rogers wrote that he had visited a convent-garden, in which he had seen ‘with the eye of faith Juliet’s stone coffin, the niche for her lamp, the spiracle for her respiration’. (The ‘spiracle’ was a hole, which in Roman times would have been designed to allow fluids to escape as the corpse rotted.) Rogers noted that the coffin was already showing signs of damage, and put this down to the English passion for relics, which had inspired visitors to pilfer bits of the stone. Jane Waldie corroborates this account in her Sketches descriptive of Italy (1820), commenting rather guilelessly on the guide’s patter in 1817: ‘Every English visitor, she says, carries away a bit of the marble; a circumstance she greatly deplores – not considering that her telling them all so, is the very way to effect the continuance of the custom’. The appetite for these relics extended to other nationalities, too. François-René Chateaubriand, attending the Congress of Verona, remarked in 1822 upon a pair of bracelets worn by Maria-Louise, Archduchess of Parma and widow of Napoleon, which had been made of the reddish stone of the coffin. Antoine Claude Pasquin Valéry mentions in Historical, literary, and artistical travels in Italy (1839) that ‘some illustrious foreigners and handsome ladies of Verona wear a small coffin of this same stone’, and in 1829, Maria Callcott, honeymooning in Italy, remarked that she had  met a gentleman sporting a fragment of the tomb set in a ring.

Some tourists went further than mere souvenir-hunting in their quest for sentimental authenticity. In the autumn of 1816, two years after Rogers’s visit, the French traveller Jacques Augustin Galiffe heard the story of an English lady, who shall remain nameless, and who had paid her devotions at this shrine some weeks before us, [who] had taken it into her head to lay herself at full length in this tomb, like a monumental figure, with her hands piously crossed on her bosom. But it is dangerous to tempt the devil, and especially in a monastery. The romantic visitor had no sooner clasped her hands on her breast, than a sudden gust of wind so disarranged her undefended garments, as to cause no slight confusion to herself, and some scandal to half a dozen male and female friends who accompanied her.

This probably apocryphal English lady recurs throughout the tourist history of the tomb, and serves here to distance the French visitor from the indecorums of English enthusiasm. But as this cautionary anecdote also suggests, English tourists were notably inventive as to ways of consuming the experience.

Enthusiasm for Juliet’s tomb was a little dampened by the publication of John Murray’s Handbook for travellers in northern Italy (1843), which cast strong doubt over the site’s authenticity. Despite the tomb being officially gazetted as a fraud, however, Victorian tourists were not deterred from visiting. In 1864 Henry Gaze’s guidebook North Italy and Venetia would sum up the situation: ‘Tomb of Juliet, doubtful; but it should be seen.’ Although Victorians rejected the tomb itself as inauthentic, they might still use the site to invoke a localised encounter with Juliet. Mary Wollstonecraft Shelley in September 1842, for example, conceding that the tomb itself was unlikely to be genuine, used her visit as an opportunity to recover Juliet as an historical personage and to connect with her emotionally: ‘Still such a scene – a garden, with its high antique walls, its Italian vegetation, and the blue sky, cloudless above – was a scene familiar to Juliet; and her spirit might hover here, even if her fair form were sepulchred elsewhere’, she wrote in her Rambles in Germany and Italy in 1840, 1842, and 1843 (1844). As Shelley’s visit reveals, the tomb and the garden in which it lay provided even the most sceptical with a sense of physical continuity between past and present, reading and reality, through engaging with Juliet herself.

Victorians seem also to have found ways of putting themselves into the tomb that risked less ridicule than the example of the English lady shared by Galiffe; in 1887, a visitor reported that the tomb’s inside was strewn with visiting-cards, left by travellers from all parts of the world, paying tributes of respect to the memory of the unfortunate girl-bride. The visitor noted that there were also photographs amongst the litter, including one of a young lady superscribed with a message of sympathy for Juliet.

Visiting the tomb, stealing souvenir-chips to set into jewellery, lying in the sarcophagus, dropping visiting-cards into its cavity, all these practices effectively expressed a desire for physical encounter or even identification with Juliet’s dead body. It’s an impulse still evident in the blogosphere, awash as it is with selfies of women posed by the tomb. What they are saying is something like this: ‘Tomb of Juliet, doubtful; but it should be seen. Here I am being seen with it.’