At Melrose Abbey (preferably) by Moonlight 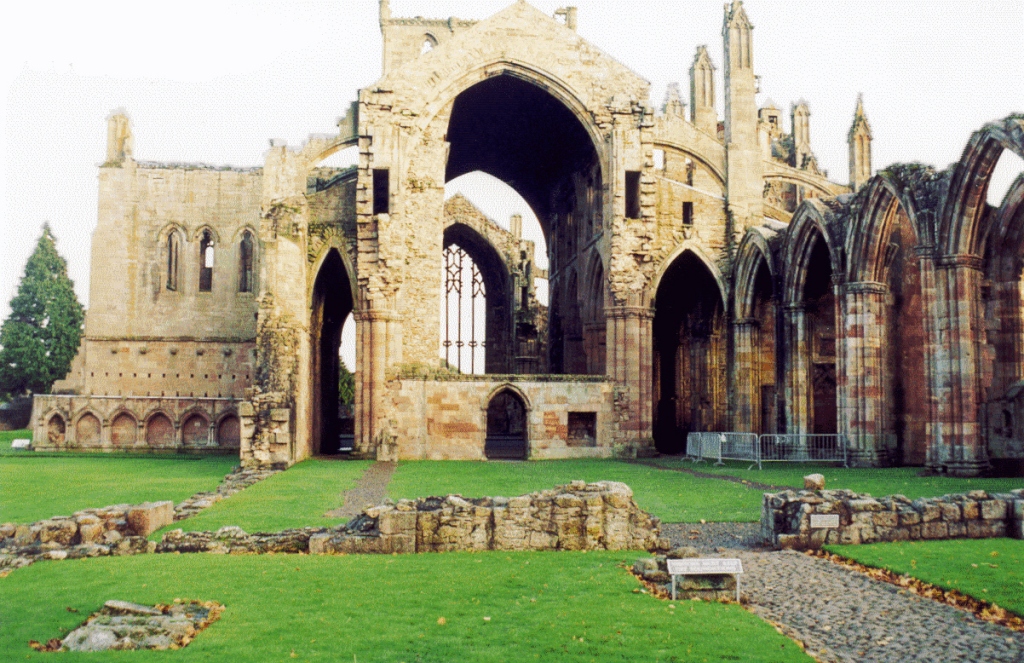 Melrose is a pretty town on the Tweed, although the Youth Hostel where we stayed for reasons of economy is very spartan indeed. We were there to visit the Abbey, preferably by moonlight (I’ll explain in a minute). In the end, what we got was a good Scottish mist, not the best light-conditions for admiring these ruins, famous for the intricacy of the surviving stonework.

Few ruins have owed their fame so overwhelmingly to one writer as the pinkly delicate ruins of the Cistercian chief house of St Mary’s Abbey, Melrose. Founded in 1136, the Abbey ruins were for a century and more understood through Walter Scott’s best-selling poem, The Lay of the Last Minstrel (1805), bringing them national and international fame as a tourist must-see.

It’s not that the ruins weren’t well-known and even celebrated before 1805. It’s that the effect of The Lay on the number of visitors to the Abbey, and on the way in which the Abbey was viewed, was striking and immediate. The Lay set new and precise expectations of the ‘proper’ view of the place and the ‘proper’ emotional experience to take home as a souvenir. This very Victorian experience was what I had come to try to get.

Canto II of The Lay opens with instructions for viewing the ruins ‘aright’:

Go visit it by the pale moonlight;

For the gay beams of lightsome day,

Gild, but to flout, the ruins grey.

When the broken arches are black in night,

And each shafted oriel glimmers white;

When the cold light’s uncertain shower

Streams on the ruin’d central tower;

When buttress and buttress, alternately,

Seem fram’d of ebon and ivory;

When silver edges the imagery,

And the scrolls that teach thee to live and die;

When distant Tweed is heard to rave,

And the owlet to hoot o’er the dead man’s grave,

Then go – but go alone the while –

Was never scene so sad and fair!

The stanza provides a description of the authentic viewing experience, offers instructions for gaining access to this experience and informs readers what to think and say then and afterwards: ‘Was never scene so sad and fair!’ Accordingly, it lent itself to helpful extraction in guidebooks, and pensive recitation on the spot. It helped, of course, if there was actually a moon and the sky wasn’t overcast; the enterprising site guide, Johnny Bower, would eventually avoid disappointing tourists by illuminating the ruin with a lantern bound onto a long stick, which, as he was fond of pointing out, was a more convenient and reliable system of illumination. It’s funny, but it’s so true.

Quotation from The Lay came to characterise accounts of visiting Melrose. One reason was the perceived accuracy of Scott’s descriptive passages; in 1834 the young American Henry Blake McLellan wrote in his Journal of a Residence in Scotland of ‘the remarkable accuracy of Scott’s description of this imposing and splendid edifice.’ In 1845, an unusually thorough American visitor described how he set about viewing Melrose, firstly by sunset, then by moonlight, and lastly by sunrise. By moonlight, he recorded in A Transatlantic Tour, ‘the scene was one altogether of enchantment – a perfect realization of the poet’s description.’ Another motive for quotation was the desire to have the poet along as the best ever tour-guide: to this end a guidebook of 1878 places the imagined figure of Scott himself within the grounds of the Abbey. This fantasy was very much of a piece with Scott’s own practice:  there is evidence that the Abbey formed part of the tour of his locality that Scott himself used to give his guests, including the Wordsworths in 1803.  Scott eventually wearied of offering these tours: when the poet Thomas Moore showed up in October 1825, he confessed that he had been tempted to come over earlier ‘to see the Abbey by the beautiful moonlight we had then; but I thought it still better to reserve myself for the chance of seeing it with him, though I had heard he was not fond now of showing it’. Moore, it seems, had tossed up whether the experience would be more authentic if taken by poetic prescription or accompanied by the author, and decided for the latter. But for those who came after Scott’s death, all that was available was the poem plus whatever ghostly figure of Scott the imaginative tourist could summon.

The Lay of the Last Minstrel overwrote established thinking-habits when visiting monastic ruins. Enlightenment musing on political debates, sentimental musing upon mortality, or Gothic fantasising of Catholic vices, were thrown aside in favour of a new way of seeing. J.M.W. Turner’s watercolour ‘Melrose Abbey: Moonlight’ of 1822 depicts this. Turner shows a solitary modern visitor struck by a flood of moonlight pouring through the east window, and places in the foreground a stone inscribed with lines from The Lay. Turner’s visitor appears part-blinded, suggesting that to see by moonlight is to see otherwise, by implication, to see like the poet. When tourists came to Melrose Abbey they sought to experience transformation and enchantment, as promised by The Lay’s famous lines on the ‘east oriel’ in Canto II:

Thou woulds’t have thought some fairy’s hand

In many a freakish knot, had twined;

Then framed a spell, when the work was done,

And changed the willow-wreaths to stone.

Often enough they found it. As one wrote in 1845, viewing the ruins at dawn, ‘my moonlight visit to it seemed like a dream, and when I saw its grey walls in the morning light, it was as if a vision of the night had been embodied in stone’.

By the late nineteenth century Scott’s spell had resulted in such tourist numbers that achieving enchanted solitude by moonlight must have become near impossible: ‘Cuthbert Bede’ lamented in A Tour in Tartanland (1863) that Melrose was all too accessible;  Scott’s ‘loved haunt, lying midway between his two earthly homes of Abbotsford and Dryburgh, is the convenient centre of a triple attraction for the quick-recurring throngs of visitors whom the railway carries to within a few yards of the Abbey’. Such popular enthusiasm is unimaginable today. The thrill has vanished as Scott’s poetry has faded out of the school curriculum. But you could always raid a second-hand bookstore for a Victorian volume of Scott, and try the experiment on yourself, like I did. And in case you were wondering, on my last visit to Melrose, I saw it at night, though not by moonlight, but by sodium light, which provided its own striking, Johnny Bowerish effects.