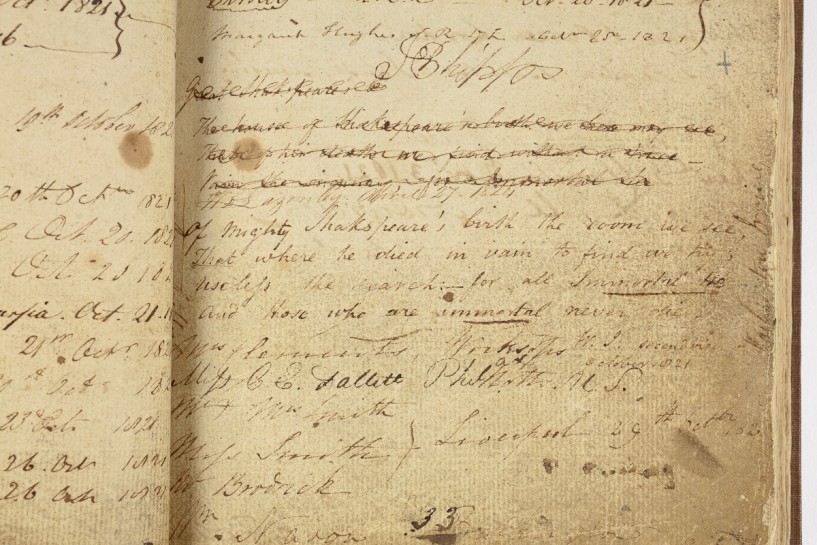 In my last post I discussed the Victorian practice of bringing books to read in the authors’ homes and haunts. Today, I will be turning from what visitors brought to writers’ homes, to what they left behind. These two things have something critical in common: they are both forms of text. Bringing with them the author’s published text, visitors would often leave behind written texts of their own, in the form of graffiti inscribed or carved in walls, mantelpieces and windows, using a specially cut diamond ring or even a purpose-made diamond stylus.

Much of the evidence of this on-site inscription has vanished. Where a mass of inscription does survive intact however is on the window pane of Shakespeare’s birthplace in Stratford- upon-Avon. The inscriptions carved here reveal on the one hand the strong desire among visitors to imprint one’s name in such a place, and the sheer wealth of tourists wishing to do so. More interestingly, however, historical accounts reveal the centrality of these inscriptions to subsequent tourists’ visits. Writing in 1822, the author of An Account of the Principal Pleasure Tours of England and Wales, declared that the underwhelming experience of visiting Shakespeare’s Birthplace (‘a small mean-looking house of wood and plaster’) was only redeemed by looking at the inscriptions:

The walls of its squalid chambers are covered with names and inscriptions, in every language, by pilgrims of all ranks and conditions, from the prince to the peasant and present a simple but striking instance of the spontaneous and universal homage of mankind to the great poet of nature.

More than simple vandalism then, what is offered by these inscriptions is the production of a readerly community, relished by successive tourists. So, if you’re still packing your suitcase for that trip you’re planning to a writer’s home or haunt, you might want to chuck in a diamond stylus, too.