August 2013 In the dog-days of August all academics should be on the beach rather than in the research library. It is the silly season, and its silliness may suitably tinge even the serious business of thinking about the nature of authorial celebrity and the cultural purposes it has served and continues to serve. In such a frivolous mood, it gives me to think about authors and their dogs, or rather authors whose celebrity has included a sense of their love of dogs.

Now it has to be admitted that many authors are much more strongly associated with cats. Think of Petrarch, of Smart, of Johnson, of Colette. There is much to be said for a cat – it is silent, undemanding, and used at any rate to belong to the kitchen – it was not so much a pet as a tolerated inmate in urban or country household, it came and went as it list, much, one might think, like writerly inspiration.  Dogs, on the other hand, are another matter entirely. Dogs are never just dogs, though cats are usually just moggies, cheap, disposable, spinsterish, sat on the mat, as indoorsish as a writer. For after all, writing for much of the history of literary culture has tended to involve paper and pens and ink, and all of those are easier to manage indoors, even if Wordsworth did manage to think up ‘Michael’ balanced on the ruined wall of a sheepfold in the vale of Grasmere.  Unlike cats, dogs have historically been markers of class status: whether working-dogs like the deer-hound, lapdogs like the Pekinese, or terriers for ratting. Dogs are very much of the outdoors, and specifically bred to different sorts of sporting pursuits – by extension, therefore, they carry class meaning. An author whose persona includes a dog at the edge of the frame is saying something about themselves. Take Lord Byron, for instance. If you go to his ancestral home Newstead Abbey and prowl about the grounds, sooner or later you will come across a large and surprising monument, topped with an urn. On closer inspection, it proves to be a monument to Byron’s beloved dog Bosun, or Boatswain. 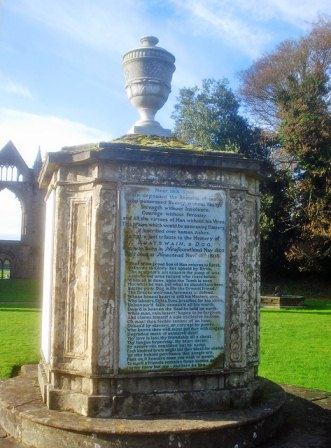 Bosun, as a Newfoundland dog, was special in his own right, and was also a regular companion to Byron.  Byron’s affection for Bosun was real enough but what interests me here is what proclaiming that affection does. It underscored Byron’s credentials as an aristocrat with a country estate on which such a dog could run.  Bosun was also an exotic, not an indigenous breed of hunting-dog, very much of a piece with Byron’s self-presentation of himself as only unwillingly British.

By contrast, Walter Scott’s dogs would seem to have described him more unproblematically as a country baronet. Domiciled in his country retreat Abbotsford, his pack of beloved dogs, ranging from terriers to his famous deerhound, Maida, were a feature of Abbotsford life and were always commented on by visitors.  So famous were they that Maida was included in the portrait sculpture that sits within the Scott monument in Edinburgh. 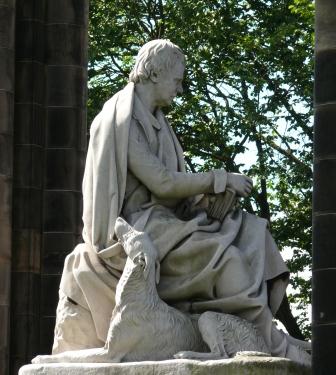 Scott’s beloved dogs certified Scottish country-life, a life of hunting, shooting and fishing, a life of leisure and land management – a life of which Scott provided an excellent simulacrum for his admiring visitors, but which was funded by a legal practice, and by writing.  Maida epitomised Scott’s fantasy of being the deer-hunting baronet, and for the nation, it provided an externalisation of the supposed ‘healthiness’ of Scott’s fiction – not too intellectual, always good for you, unimpeachably masculine.

And what of women writers? Did they ever have dogs? Flush, Elizabeth Barrett Browning’s lapdog spaniel, springs to mind, although he achieved fame not so much in his own time as through Virginia Woolf’s portrayal of him in her cod autobiography. Still, in general, literary genius has been more glamorously identified with wilder animal-daemons than dogs — hares in the case of William Cowper, foxes in the case of Ted Hughes, ravens in the case of Philip Pullman. Only thus can we account for Norman Mailer’s dog-tribulations – it is said that this king of macho-fiction was embroiled in perpetual dog-fights with persons who showed the merest glimmer of a sneer at his beloved dog, a poodle.