The origins of the Moravians date back to the foundation of the Unity of Brethren in 1457 by Gregory, the Patriarch of the Moravian city of Kunwald. After years of persecution, the church re-emerged in 1722 with the establishment of the settlement (a planned community) at Herrnhut in Saxony on the estate of Count Nikolaus von Zinzendorf. Moravians from the Herrnhut community visited England in 1734, seeking permission to settle in the American colonies. There was, however, great interest in the Moravian Church in England, and the first English congregation was established at Fetter Lane London in 1742. The settlement at Fulneck was the first in England – the land was acquired in 1743 and the foundation stone for the church was laid in 1746 – while Fairfield was the last with the foundation stone laid in 1784.

These two sites are integral to my fieldwork for my PhD thesis on Contemporary Moravian identity in historical perspective. Combining archival research and contemporary fieldwork at these two Moravian settlements in England, my thesis examines contemporary notions of Moravian identity and tradition from a historical perspective. I investigate how members of these settlements view the history of their church and its relevance to them now. Open Days were cancelled during the pandemic in 2020, but they are now back on track, and I have finally been able to visit the settlements again. They are of a similar size: Fulneck has ninety-eight residents and Fairfield one hundred and six. Fulneck is built on a hill, its orientation is linear. It consists of a single one-way road running parallel to the buildings and a lower-level cobbled walkway. Rather than a single road, the settlement at Fairfield contains three in the form of a capital F, rotated ninety degrees.

Heritage Days were held in Fairfield on 12th September (though more toned-down than pre-Covid) and in Fulneck on the 18th of September 2021. These Open Days gave the residents of the two settlements the chance to present to the public the importance of their history and heritage, the things that matter to them, their public facing identity. Both settlements offered similar programs with guided tours of the settlements, and opened their doors to both their museums and churches. Fulneck church had an exhibition on the theme of food and the self-sufficiency of the settlement, while at Fairfield, there were presentations about the history of the Moravian Church and the development of the settlement.

What then do these Open Days tell the visitor about the way contemporary Moravians present themselves to the public? Common themes of the settlement tours and of the exhibits included the importance placed on a sense of community and heritage, and residents’ pride in and identification with the settlements and their history. However, the onsite museums also reflect differences between the two settlements in their approach to history. The museum at Fulneck is the older of the two. Opened in July 1969, it is titled a ‘museum of local history’ and is very much focused on the history of life in the settlement. Fairfield, on the other hand, juxtaposes 18th century Moravian practices of worship with 21st Century worship, showing continuity and development, rather than dwelling on past traditions.  The comparison between ‘then and now’ is a theme that runs throughout all of the Fairfield museums’ exhibits. The ‘now’ stands out most with the display of how Fairfield is used in television and film the most recent being the TV series Peaky Blinders and the film Mrs Lowry and Her Son. 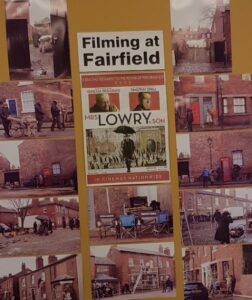 Of course, the desire to use Fairfield in period film is also due to the settlement being unspoilt and grade two listed, without satellite dishes and other modern-day clutter. However, it also says something about the community’s pride in the picturesque location of their settlement that they want to share. Furthermore, this represents an interesting contrast: on the one hand, the fact that the Fairfield community allows TV / film crews to use their settlement as a backdrop reflects a willingness to embrace modern technology, while on the other, it maintains the old-world image of the settlement itself.

While their history and heritage form a part of their identity, it is important to remember that these are active living religious communities today. As both the guides to the tours pointed out, there is so much happening in the settlements, both secular and religious, it is very difficult for the residents to not become actively involved in community life.