This month we welcomed Dr Jan Haywood to the OU Classical Studies team. In this post, he tells us a bit about his academic background and research projects. 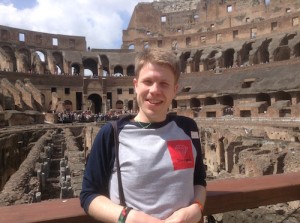 I am delighted to be joining the Classical Studies team at the Open University, having previously held teaching positions in Classics/Ancient History at the University of Liverpool and the University of Leicester. I began my academic studies reading for a BA in History, followed by an MA in Classics and Ancient History at the University of Manchester. I then read for a PhD on the topic of Herodotean intertextuality with Professor Thomas Harrison at the University of Liverpool. Intertext and Allusion in Herodotus’ Histories: Authority, Proof, Polemic identifies substantial connections between Herodotus’ work and other textual sources (oracles, prose writers, epic poetry, etc.). By highlighting his extensive engagement with a wide range of texts, my research reopens the debate on Herodotus’ source materials, since the majority of scholars accentuate his use of oral traditions. I am now putting the finishing touches to a revised version of the PhD, which will soon be published as a monograph.

My interest in antiquity is omnivorous, and I am increasingly concerned with exploring the impact of later receptions on our understanding of the ancient world. With this in mind, I am currently collaborating with Dr Naoíse Mac Sweeney (University of Leicester) on a research project that explores multiple receptions of the Trojan War/Iliadic tradition, looking synchronically across a variety of media and geographic contexts. The research examines a diverse suite of responses to the Iliad, whilst isolating particular motifs that recur in different reception contexts. For example, our research illustrates the way that various individuals across space and time have attempted to verify the historicity of the events related in the Iliad. The fifth century BC historian Herodotus, for instance, underscores the essential truth of Homer’s account in his rationalising version of the Trojan War. Similarly, Heinrich Schliemann interpreted his archaeological excavations at Troy in the 1870s as demonstrable proof of Homer’s Trojan War. 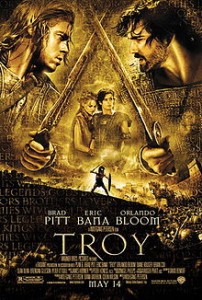 The most recent research that I have conducted for this project centres on Wolfgang Petersen’s 2004 film Troy, a film that claims to be ‘inspired’ by Homer’s Iliad. As others have already shown (including our very own Joanna Paul), the film focuses pointedly on the Homeric motif of kleos (everlasting fame)—an essential Homeric concept that denotes the illustrious glory which awaits the Trojan War’s central heroes. While many reviewers at the time criticised the filmmakers’ ostensibly ham-fisted application of this motif (see, e.g., Tim Robey’s blistering review for The Telegraph), it is worth bearing in mind that the heroes of the Iliad and the Odyssey (Achilles, Helen, Odysseus, Telemachus) are no less hell-bent on speaking of their desire to achieve kleos. Indeed, when we first meet Helen in Book Three of the Iliad, she is depicted weaving a great tapestry, on which is embroidered the conflict between Trojans and Achaeans (i.e. Greeks). Helen’s tapestry helps to reify the very heroic deeds that are the fabric of Homer’s Iliad.

In thinking about Troy’s Homeric connections, it is essential, of course, to observe the film through this prism of its own political-cultural context. In doing so, we might well be surprised to discover a decidedly nihilistic presentation of the Greeks’ central leadership. To be sure, Agamemnon and Menelaus are far from the most celebrated warriors in the Iliad (albeit note that Agamemnon is afforded his own heroic moment in battle or aristeia in Book Eleven), but neither are they imagined as morally bankrupt leaders. In contrast, Troy presents Menelaus as a lecherous, ineffectual brute, while Agamemnon is characterised as a (somewhat camp) evil sociopath, obsessed with achieving world domination. Even the other Greeks leaders (aside from the individualist Achilles) are presented as impotent, unable to constrain Agamemnon’s untrammelled desire to control the Aegean.

This contrast between the Greeks of the Iliad and Troy naturally led me to question why it should be the case that the film should offer such an insalubrious portrait of the Greek heroes. As I peered further into the background of the film, its production history, and other paratextual material (e.g. media interviews with the film’s director Wolfgang Petersen), it has become increasingly apparent that the film forges an uncomfortable parallel between the imperial actions of Agamemnon with the contemporary political manoeuvrings of George Bush. In one interview with Westdeutsche Zeitung, for instance, Petersen teases out the monochromatic worldview of Agamemnon and Bush alike, concluding that ‘projects driven by belief and fanaticism often end in disasters’—perhaps a reference not only to the fall of Troy, but also the filmic deaths of Menelaus, Agamemnon and Achilles. My research demonstrates that through the cartoonish villainy of the Greeks’ chief leader, Troy engages in a wider historical dialogue on the reasons for, and validity of the Trojan War.  The film ultimately refracts the Homeric account of the war, reorientating audience sympathies away from the Achaeans towards the beleaguered Trojans, whose citadel is destroyed by an outrageous warmonger.

I hope that this brief introduction illustrates my wide-ranging interests in the classical world and its receptions. I am very much looking forward to engaging with students and colleagues alike in the months and years ahead.