This week Jan Haywood reports on a trip to Greece to film material for our new Classical Studies Module. 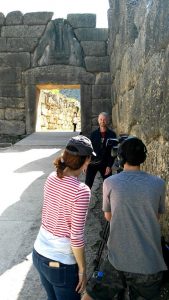 Elton on camera at the Lion Gate, Mycenae

The Classical Studies team at the OU are currently working hard to produce our brand new second-level undergraduate module, ‘Exploring the Classical World’ (A229), which will replace its predecessor of the same name, and which is due for its first presentation in October 2018. The module will cover a whole range of aspects of the history, literature and culture of the ancient Greek and Roman worlds, from the Homeric poems to the Roman imperial period. As part of the production process, the module team is also creating a number of audio-visual resources, including two new films, one focusing on the archaeology of Mycenae and the other on the Athenian religious festival, the Panathenaea. Last week my colleague Elton Barker and I were fortunate enough to travel to Greece with a production team—Morgan Phillips and David Herd from Angel Eye Media—to create these new films. 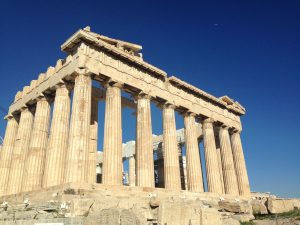 The filming began at the ancient site of Mycenae (in the Argolid gulf), and then moved to several sites in Athens, including the Acropolis, the agora (Athens’ central marketplace in antiquity), the Cerameicus (a well-preserved cemetery located at the outer limits of classical Athens) and the spectacular National Archaeological Museum of Athens, which hosts a fabulous collection of Greek antiquities. 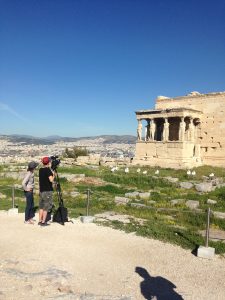 The entire trip was a fascinating, deeply rewarding experience. While Elton and I have spent years studying the classical world, and both of us have considerable teaching experience in higher education, the filming process quickly proved to present a novel set of challenges. On the first day of filming proper, we were exposed to many of the obstacles that are associated with recording video footage. Hyper-sensitive audio equipment (apparently asking after one’s breakfast to get the audio levels for the microphone is a commonplace in media circles), loud crowds, gusts of wind, hedge trimmers, tuneful European sirens, seemingly endless numbers of enthusiastic street-sellers (lime green pillows are clearly all the rage in modern Athens!), and unexpected bug attacks were just some of the less esoteric trials that we had to contend with as the camera rolled. 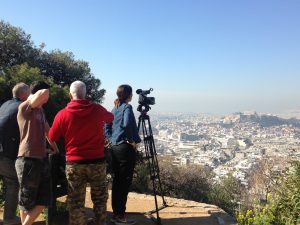 Capturing the Acropolis on camera

At the sites where we were filming, we had the opportunity to record brief vignettes (known in the media business as ‘pieces to camera’); it was during this process that we were presented with the chance to think afresh about our discipline. Indeed, working with Dave and Morgan—who were coming at things from a visual storytelling angle—brought into sharp relief the core argument in each of our films and the signal importance of thinking about the Greek landscape. For instance, it was while the crew was capturing various shots of the Acropolis from the Areopagus (a low hill northwest of the Acropolis, literally meaning ‘Ares Rock’) and I was looking over westwards towards the Pnyx (the meeting place for Athens’ citizen assembly in the Classical period) that I came to appreciate more clearly the complex topographical and ideological dialogue between the Pnyx, the beating heart of Athenian democracy in the fifth century, and the Acropolis, the city’s highest point, where the ancient Athenians would make offerings to their city’s gods. There were several such moments in which our engagement with the Greek (built and natural) landscape served to inform and enrich the content of the module’s new films.

It would be impossible for me to sum up in a single sentence what was a highly edifying week. Instead, I shall leave you with the words of Morgan, the director: “That’s a wrap!”

Editor’s note: For news on the progress of this new module, and more images taken on location by Jan and Elton follow @OU_Classics on Twitter or search for the hashtag #OUA229.

2 thoughts on “Exploring the classical world: on location with the module team”