Many of you know Mair and the enthusiasm she has for reminding us that Latin was, and can be, a real language, more than grammar grind and reading a bunch of fusty old texts…! I hope you’ll join with me and Mair’s other supervisors – Regine Hampel, Uschi Stickler, Linda Murphy – in congratulating Mair on her amazing achievement of winning the prestigious AOUG Vice-Chancellor Sir John Daniel Award for Education and Language Studies (2016). 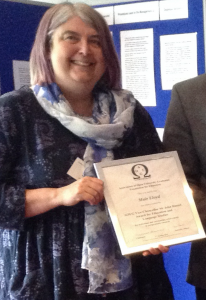 Mair, with her enthusiasm and dedication, has bridged boundaries and brought a lot of people and ideas together. By sharing supervision between the Classical Studies and Modern Languages departments we have learned much from each other (and the ways we work with language and think about language). By asking pertinent questions in her research, Mair has made Latinists across the country aware of the value of technology for teaching and learning, and by travelling to the US and participating in a Latin immersion course as a student, Mair has herself experienced the power of Living Latin for real communication.

The award Mair has received is in the name of Sir John Daniel, an educator who has always encouraged the use of technology, and promoted learning in unconventional ways and places, so it is quite fitting! Mair’s research is about making learning better and more enjoyable. She has discovered that ‘good Latin learners’ read with engagement and with fluency, and has demonstrated that Latin is a language that can be brought to life and can be used.

‘Tweeted’ reactions to her organisation of the ‘Living Latin’ panel at the 2016 Classical Association conference in Edinburgh (for which she secured the attendance of leading exponent of Living Latin, Prof. Tunberg from the University of Kentucky) illustrate this point:

@MairLloyd‘s enthusiasm makes Vygotsky accessible even at 9am in the morning. Great introduction to the theory behind Living Latin #LL#CA16

#CA16@MairLloyd is absolutely brilliant. There are many layers to language learning. Learners can help each other in the process.

The Living Latin panel. It has been mind-blowing. And we all spoke some Latin!

The panel on Living Latin is so mesmerising and inspiring it is difficult to tweet… sorry! Blog to follow. #CA16

Mair’s exploration of learning to read in Latin has highlighted aspects of reading that have not been extensively explored in modern languages either  – i.e. exploring reading with comprehension in the target language without resorting to translation or checking unknown vocabulary, and reading with engagement. She has used an innovative approach to evaluation of this type of reading that includes reading and drawing.

Her research has been far more extensive than that which is presented in her final thesis, and she will be submitting a range of further papers and conference presentations outlining findings related to learning of Ancient Greek and the development of interaction and collaborative Latin learning through Information and Communication Technology.

Mair’s thesis, Living Latin: Exploring the communicative approach to Latin teaching through a sociocultural perspective on Latin learning, is an investigation of the current approach to the ab initio teaching of Latin in Classics departments in UK universities and how this aligns with the aims and aspirations of students. Drawing on Second Language Acquisition theory and practice in Modern Language teaching she has examined how the implementation of methods and activities based on a communicative approach to Latin teaching can help students to attain their ab initio Latin-learning goals. She then explored the explanatory value of a Vygotskian sociocultural theoretical perspective (as applied to modern language learning) in the analysis of learning events during communicative Latin teaching and interpersonal interaction in Latin. The research forges new links between the Department of Classical Studies and the Department of Languages.

Mair came to the research having noticed her own difficulties as a beginner getting to grips with reading Latin, compared with the faster progress she felt that she had made as a beginner learner of French. She intuitively felt that the more interactive use of French might actually be helping her to read more easily in French, and that Modern Language theory and practice might have some benefits in the teaching of Latin. Like many learners of Latin and their teachers, her aim was to be able to read and enjoy original texts in order to be able to gain insight into and appreciate the life and perspectives of the writer and the ancient world.

Although a number of classicists have previously looked to Modern Language theory and pedagogy to inspire their approach to Latin teaching, Mair has established that little or no attention has been paid to demonstrating the benefits of these approaches for Latin teaching or determining how well their effects are explained by language learning theories. The results of her survey of UK University Classics departments showed no evidence of awareness of curricula underpinned by theoretical positions. Despite having no previous knowledge of language learning theories herself before beginning her research, Mair has analysed current approaches and classified them according to the theoretical and pedagogical concepts drawn from Modern Language research. To achieve this, she has drawn on research conducted by fellow postgraduate students and brought together a range of different perspectives on theory, history of language teaching and methodology, supplemented by her own insights into the field. She has demonstrated that much current Latin teaching practice can be classified as behaviourist and structuralist with a heavy emphasis on cognitive skills, but shows very little evidence of developments in modern language teaching which focus on interaction, context, collaboration and emotional response and have been strongly influenced by a Vygotskian sociocultural theoretical perspective.

Mair therefore sought out examples of Latin teaching and learning that resembled more closely the situation in modern language teaching where interaction through oral communication involving both speaking, listening comprehension and negotiation of meaning in the target language is a regular component. She found them in the form of a week-long ‘immersion’ programme at Lexington in the USA. This ‘Conventiculum’ proclaimed the benefits of learning Latin through interaction in Latin and collaboration with other learners as well as interaction with original texts, though once again this seemed to be based on an intuition of the benefit rather than having a firm theoretical perspective. As a participant observer at this event, Mair was able to gather data on the experience of beginner and more experienced learners, including her own reactions, to their ‘immersion’ in Latin and the types of activity and interaction and they engaged in.

Data collection at the Conventiculum included asking participants to read a short passage in Latin and to make a drawing of what this passage evoked for them. They were asked to do this both before and after the event. They were encouraged to envision the scenes described in the passages without making a translation into English. This represented an innovative way to examine readers’ responses to the passages. It enabled readers to avoid the mediation of another language (as would have been the case if comprehension questions in English were given) or adding complexity by questioning in Latin. It also allowed a more personal response to the text. Readers noted the mood of the scene evoked, for example. This method has not been employed to any extent in modern language learning, where despite attention to so-called ‘intensive’ and ‘extensive’ reading (for specific information or for gist), there has been little attention to reading and understanding entirely within the target language and in understanding what is meant by ‘engagement’ in reading.

In her analysis of the data gathered from the communicative Latin teaching and interpersonal interaction in Latin at the Conventiculum, Mair explored the explanatory value of a Vygotskian sociocultural theoretical perspective (as applied to modern language learning). Her findings indicate that this may be a positive way forward in understanding how reading in Latin and engagement with original texts can be facilitated and become more enjoyable for learners of Latin and other ancient languages. 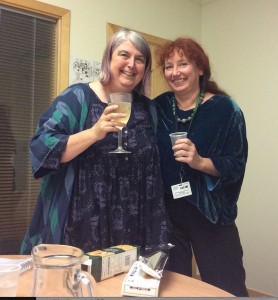 Since receiving her award, Mair has passed her viva and can look forward to soon being Dr Lloyd, author of Living Latin: Exploring a Communicative Approach to Latin Teaching through a Sociocultural Perspective on Language Learning. Look out for more from Mair, as she has no intention of stopping here, with publications in the pipeline and Ancient Greek to deal with next…

On behalf of the OU Classical Studies department and CREET, and especially from the four of us who supervised you, congratulations Mair, and bona fortuna! As Uschi put it at the AOUG Award Ceremony, Mair fabulosa est!

3 thoughts on “A celebration of Mair Lloyd’s ‘Living Latin’”