BG REACH (Blaenau Gwent Residents Engaging in Arts, Culture and Heritage) is a collection of art, music, creative writing and film that tells the history of the area. Since 2020, the project has been led by local people, supported by academics from The Open University’s Faculty of Arts and Social Sciences, Linc Cymru Housing Association and Aberbeeg Community Centre.

In July 2021, an online exhibition was launched that includes video diaries, digital stories, creative writing, paintings, drawings, music and film produced by people living in Blaenau Gwent. It can be viewed for free at the OU’s free learning site OpenLearn. 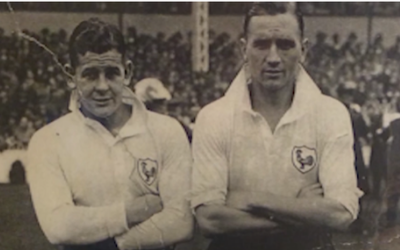 Digital stories: remembering the past

The digital stories feature residents of Llys Glyncoed extra care scheme, near Ebbw Vale, who were interviewed by year nine pupils from Ebbw Fawr Learning Community. One of the Llys Glyncoed residents, Fred Pettican tells of his memory of playing football for Newport side Victoria against Bridgend in 1960. His corner was headed in by a player who coincidentally came to live in Llys Glyncoed at the same time as Fred. He also still has the match ball from the game!

Many of BG REACH’s participants have produced poems and prose to capture the history of the area and their feelings of growing up there. In Remembering Cwmtillery, 61 year-old Stephen Davies recalls visiting his grandmother as a child. He has also produced sketches of some of the landmarks mentioned in his work. 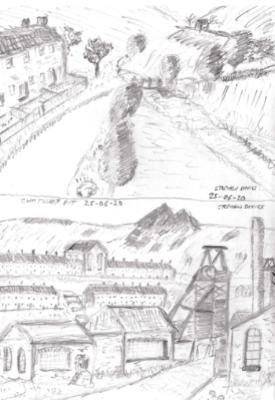 We would then return to my nan’s house in West Bank. And have tea. She made nice apple tart + custard. She also made her own bread pudding. And rice puddings. They were the days people made and cooked their own food. Very different from today.

After tea. I would meet up with a few friends I knew. We would have lots of fun. Sliding down the bank. From Top Rows to West Bank. On bits of cardboard. This banking is now covered in large trees. And my nans old house is gone. Sadly. Both mam and dad. Have now passed away.

In her poem Bathed in Birdsong, Susan Davies describes the peaceful surroundings of the valleys, made all the more quieter as a result of the coronavirus lockdown.

Bathed in Birdsong
Bathed in birdsong, I love this place of peace
Enjoyed the spring here
Which was almost stolen from me, but was in fact, enriched

Extract from Bathed in Birdsong by Susan Davies 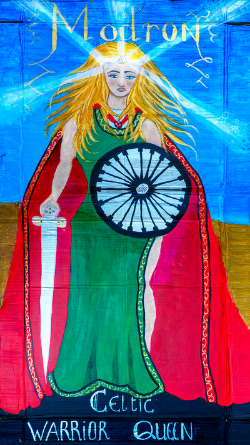 Visual artwork also forms part of the exhibition, including The Guardian by Mark Burns, based on the Six Bells Guardian; Modron by Barbara Candish, which is a painting and accompanying poem celebrating a mythic Welsh warrior Queen of the Silures tribe which once occupied the area; and photography by Linda Stemp which captures some of the area’s historic buildings.

“The key to unlocking the hidden history of Blaenau Gwent was to support participants to design the project themselves – to decide what they wanted to focus on and how best to achieve that. The artworks, poems, stories and songs in the online exhibition are a celebration of Blaenau Gwent’s heritage expressed through the talents of the people who live there. The Gwent valleys are part of Wales’ forgotten heritage. They’re often associated with industrial fervour followed by economic decline, but – as people will see from taking a look at the exhibition – there’s so much more to them than that.”

The impact of the pandemic

The coronavirus had an impact on much of the project. A musical piece, Cynefin, was written by some of the group members with a view to performing it live. The pandemic put a halt to their plans, but the group continued to meet online, and recorded Cynefin 2 over video. Cynefin is a Welsh work referring to a person’s connection to an area and its people. The tune draws on Welsh folk music, including lullaby Suo Gân and love song Ar Lan y Môr.

Member of the Senedd for Blaenau Gwent Alun Davies addressed attendees of the launch.

“The Blaenau Gwent REACH project, coordinated by The Open University in Wales in partnership with Linc Cymru Housing Association and Aberbeeg Community Centre, is a fantastic example of bringing people together and of the power of using creative arts to explore identity and heritage.”

This blog is protected by dr Dave\'s Spam Karma 2: 765 Spams eaten and counting...