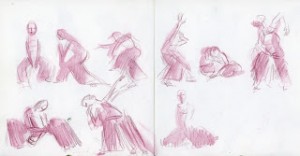 As part of his practice-based research into creating narrative in music and dance, Malcolm Atkins is working as a composer/performer with the group Avid for Ovid who interpret narratives from Ovid’s Metamorphoses through solo dance and music, and in this follow the approach of tragoedia saltata – danced tragedy or Roman Pantomine, the most popular art form in Ancient Rome.

The group is performing twice in October:

On Friday 30th October at the Ashmoleam Museum from 7-10.30 pm as part of  ‘Dead Friday’ (tickets £5 per person Under 12s free) Malcolm Atkins, Marie-Louise Crawley, Ségolène Tarte and Susie Crow will be performing during the whole evening . Ashmolean Museum – ‘Dead Friday’

Ben Winters is a Senior Lecturer in Music.
View all posts by Ben Winters →
This entry was posted in Performance, Research. Bookmark the permalink.