Scientists from the Space Instrumentation Group (SIG) at The Open University and BAE Systems have worked together with members of the MoD’s Defence Equipment & Support (DE&S) to develop a step-change in a vital piece of safety equipment on board future Royal Navy submarines.

Submarine atmosphere monitoring is a specialist area that holds particular challenges and requires specialist equipment for long term monitoring across the vessel. BAE Systems and DE&S identified the need to develop a UK capability in this area and the need for a new analyser, harnessing the expertise behind Ptolemy - the shoe-box sized instrument OU scientists developed and built in collaboration with the UK’s Science and Technology Facilities Council’s (STFC) RAL space team for the European Space Agency’s Rosetta mission.

Business Secretary Vince Cable said: "Rosetta is a great example of how our investment in big space programmes delivers a wide range of benefits for the UK. Not only do we get to explore our solar system and push the boundaries of science, but we reap the considerable economic and social benefits that new space technologies provide. It’s great to see the skills and technologies our scientists and engineers have developed for this mission being applied in other areas."

The OU team, led by Dr Geraint Morgan, was selected for the project as the approach required to develop space instruments, unlike traditional academic departments, requires a multi-disciplinary approach and collective experience of developing systems that push the boundaries of engineering. The team applied their cutting-edge know-how to the development of the new analyser, enabling the creation of a design that would be smaller, cheaper and more capable than the existing solution. DE&S funding was sought and won via the BAE Systems Technology Demonstrator Programme to investigate and then develop a UK capability.

Martin Bean, Vice Chancellor of The Open University said: "This project is a great example of how the expertise and know-how of the best research groups in British Universities can be harnessed by British industry and government departments and applied into new areas that have a significant national impact in strategically important areas. We are delighted that this work has been awarded a highly prestigious BAE Systems Chairman’s Silver Award for Innovation – a wonderful recognition of the project’s success and future impact."

Mark Scaife, Engineering Manager at BAE Systems Submarines said: "Nuclear submarines are amongst the most complex machines ever devised, patrolling a hostile environment 24 hours a day, 365 days a year, in some of the most remote places known to man. The Atmosphere Analyser is capable of giving real-time readings to crews so they can react quickly to any dangerous build-up of gases, an invaluable safeguard and one that can potentially save lives." 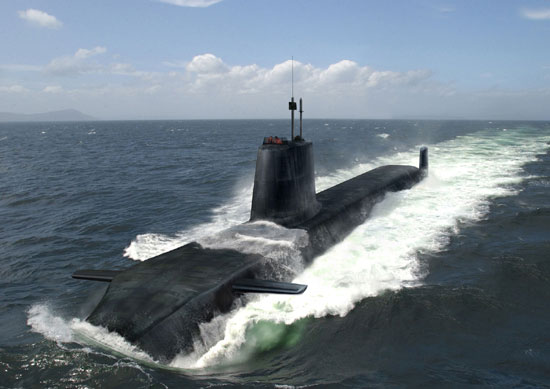 The equipment has been tested on patrol and has demonstrated a significant performance improvement over the existing equipment with improved accuracy and precision, a greater range of analytes measured, enhanced automation, a significantly improved user-interface and lower unit cost. The system has now become part of the design for the Vanguard replacement programme. There is also an opportunity to fit onto Astute Class boats, and across the entire fleet to provide performance/safety improvements and eventual cost savings. The UK company Analox Military Systems has now been selected to finalise the development and to manufacture the systems.