Ida and Louise – a radio commission for Jane Purcell

Posted on September 5, 2011 by Clare Spencer

I’ve just been commissioned to write a five part Woman’s Hour Drama based on the lives of Ida and Louise Cook.   Both were avid opera lovers and during their travels to Europe in the 1930s became aware of the persecution of the Jews.  This was contrary to the bland reports received in the British newspapers.  When Ida started writing successful romances for Mills and Boon and Louise learned German, they used the money to sponsor and rescue dozens of Jewish families, right under the noses of the Nazis.  I’ve tried to think of other titles but Ida and Louise seems to have stuck – despite or maybe because of Thelma and Louise.

Here’s a picture of the two of them in their opera finery: 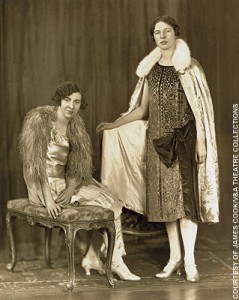 This entry was posted in plays, radio and tagged BBC Radio 4, commission, drama. Bookmark the permalink.