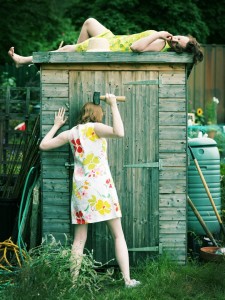 I’d always wanted to collaborate on a site-specific piece, and when Nutshell’s director Kate Nelson asked me to write a play for her allotment for the Edinburgh Fringe, I jumped. Partly in excitement, partly in terror. Terror because we’d be devising with actors – so no more self-contained writer + laptop = script. Excitement because I knew I wanted to learn more about how theatre works, and get to grips with using exterior physicality, objects, time and space to tell a story.

Some exercises we did were familiar from creative writing. Take an object, improvise, judge nothing, see what unfolds. Except this time, the improvisation came from the actors, Joey and Mary. My role was to notice, note and learn. Their work with aprons and spades created differences in status, and several conflicting characters appeared – all wordless. We discussed what they meant to us. Themes started to emerge: family, rivalry, yearning, control. 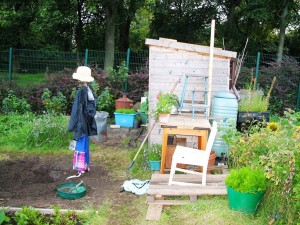 Then we went to the bare, grey February allotment. Joey and Mary experimented with actions, perspective, height and inside/outside using the shed and surroundings. We took pictures that were lost but it didn’t matter. By the time it came to writing, I found I didn’t even need my notes. I had a store of ideas and images, and two characters had clearly distilled: sisters Dora and Maddy. Now they needed a story.

While writing for the outdoor space, I knew the actors would have to compete with traffic, distractions and weather for the audience’s attention. This suggested a bold, strong performance style, and the writing would need to serve that – so pace, rhythm, vowel sounds and the use of a narrative frame all came into play. 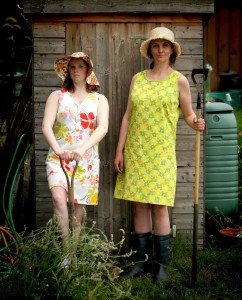 Dora and Maddy in ‘Allotment’

Seamus Heaney’s Beowulf helped us to solve a tricky issue – how do the actors signal the start of the play and focus the audience without help from curtains and lights? Particularly when the show begins with them chatting to the audience, and they need to create a transition. Heaney brilliantly translates the opening Anglo-Saxon hwaet as ‘So.’ So with full-stop. The story-teller’s so. It’s beautifully clear and economical, and we stole it.

Joey and Mary had other commitments for August, so when it came to rehearsals, Pauline and Nicola joined us, and the allotment was planted up for the set. By July, it was lush green and full of bees and strawberries – a very different place. It struck me that a very different play would’ve appeared, if we’d started then.

The allotment holders came to the previews. More excitement, more terror. Playwriting is such a tightrope – you never know whether it really works until it goes in front of an audience. Thankfully, it did. Exeunt writer and director, job done. Enter Dora and Maddy, bearing bunches of mint. So.

ALLOTMENT has won a Scotsman Fringe First for new drama at the Edinburgh Fringe Festival 2011, and was produced by Nutshell Theatre. Jules Horne teaches on A363 in Scotland. Her site is at www.juleshorne.com.

This entry was posted in awards and prizes, performance, plays and tagged drama, Scotland, theatre. Bookmark the permalink.