Word on the Street

My novel ‘Word on the Street’ will be out in paperback and ebook in September, published by Cillian Press. They are a new independent based in Manchester and they’re a great team. I was allowed in on a meeting with the cover designer, which is probably every writer’s dream. 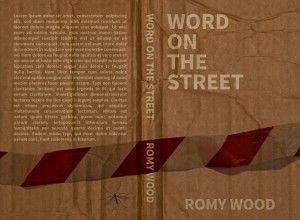 It was so interesting to be part of a meeting between the three parts of the process – writer, publisher and designer – all working together and looking at things from the different angles. ‘Word on the Street’ is about homelessness, life writing and dermatology. It’s dark comedy, and that was one of the hardest elements to convey in a cover. We didn’t want it to look like a crime or mystery novel, even though it is both of those, and we didn’t want it to look like a romance, even though it is. I’m looking at book covers with new eyes now.

I teach Creative Writing, write novels ('Bamboo Grove' and 'Word on the Street') under the name Romy Wood, look after my children and walk the tightrope that is bipolar disorder.
View all posts by Romy Thomas →
This entry was posted in novels, Uncategorized and tagged book cover, design, homelessness, novel. Bookmark the permalink.