Posted on February 4, 2013 by Clare Spencer
My poetic praxis principally stems from PhD studies on twentieth-century kinaesthetic and otherwise experimental poetry (e.g. visual poetry, sound poetry, Merz, L=A=N=G=U=A=G=E) – what could be called avant-garde Modernism or Postmodernism.  Making it new, both in terms of structure and content, predicated on an unambiguous acknowledgement of living in a scientific epoch, with the machine achieving ubiquity (for good and ill), are significant factors. A chunk of my thesis was published by Routledge and can be found at: http://www.scribd.com/doc/36374179/KURT-MERZ-SCHWITTERS-AESTHETICS-POLITICS-AND-THE-NEGENTROPIC-PRINCIPLE-Mike-Johnson

Early success in being professionally published (including Macmillan and Oxford University Press) was simultaneous with these studies and I found equal amazement and amusement in the fact that the most fecund outlet for my poems began to lie in the general area of children’s  poetry! Naturally, pieces were increasingly targeted to a young and/or crossover audience (which additionally prevented a degree of self-indulgence) and the use of intriguing layouts on the page and an enchantment with language play turned out to be highly effective. So fruitful, in fact, that for much of the 1990s I was regularly asked to contribute poems for anthologies and I had something like 220 poems published. Anthology work has lessened in the twenty-first century, though I still get requests e.g. for a collection celebrating the Olympics, last year. Performing my poems in schools to an eager audience and then getting them to write their own, has been an supplementary joy, over the years. 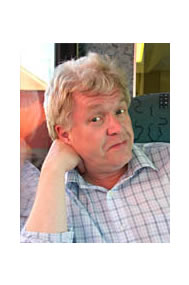 According to the ALCS (Authors Licensing and Collecting Society) my poetry has  frequently been used in various ways and for diverse purposes, from Canada to Finland to New Zealand and places in between – I’m global! Details of much of my writing can be found at http://poetryzone.woodshed.co.uk/johnson1.htm

An agreeable concomitant of being in so many collections has been that I have subsequently had work selected for educational publications in UK, China, Germany and North America with Ireland forthcoming. I also had a poem published in The Times and I have appeared on several radio stations.

Enjoying the challenge of being inventive is still a major drive. I seek publications and competitions all over the English-speaking world and I recently had success in the Age UK Poetry Competition, eventually performing to Royalty – details of this can be found at http://www.youtube.com/watch?v=KBAwx-K8pLY

I have been lucky with my poetry in that my passion for the imaginative is shared by a number of editors, adult readers and especially children.  In teaching for the Open University and elsewhere, I try to project this passion (within module parameters). To date, I have seen 19 students published professionally – I would dearly love to reach 20 soon.

This entry was posted in poetry, research and tagged writing for children. Bookmark the permalink.