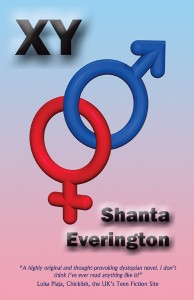 The novel follows the story of fifteen-year-old Jesse, who lives in a world where babies are born neither male nor female, and Compulsory Gender Assignment is carried out at birth. But Jesse is keeping a secret. Pulled in different directions by her boyfriend Zeus, mother Ana’s Natural Souls, and new friend Ork, leader of We Are One, Jesse is forced to make her own mind up about who she really is.

Jesse’s story in XY came out of my fascination with the question: What does it mean to be male or female? Is gender identity biologically, psychologically or socially constructed? Writing helps me unravel questions and make sense of the world. Often several unconnected threads come together to form an idea for a book.

When I became a parent, I was shocked at how much gender stereotyping still exists. You can’t walk into a children’s store without being bombarded with pink for girls and blue for boys. Why shouldn’t my sons wear pink tutus or play with dolls? Why, as a society, do we tend to see this in a different way from girls wearing trousers and playing with fire engines?

While pondering on this, I read somewhere that scientists had linked ‘blended gender’ in fish to contaminants like pesticides, household laundry detergent and shampoo, and many pharmaceuticals. Similar things have occurred with other species and I got to wondering where this could lead and what would happen if we lived in a world where humans were born with indeterminate biological sex. How would society react? Would we still create gender roles? Would fear cause us to revert to traditional stereotyped views of the sexes?

When I had almost finished writing XY, a TV programme aired on BBC One called Me, My Sex and I which challenged the deeply-held assumption that every person is either male or female. According to the documentary, intersex conditions are, in fact, as common as twins or red hair – nearly one in 50 of us has some form of intersex. Yet it is a subject not often talked about.

XY draws on many influences. I was inspired by Malorie Blackman’s Noughts & Crosses series set in a fictional, racist dystopia. We may be born with a skin colour and biological sex but race and gender are social constructs. XY is set in an alternative reality – where 91% of human babies are born neither male nor female.

XY is my seventh published book and I am currently completing a sequel. I have published fiction (for adults and teens), poetry and non-fiction, all with small presses. For me, being creative is about having the freedom to experiment with different forms and audiences. My next big project will be life writing.

Shanta Everington teaches on A215 Creative Writing and has recently worked as a Facilitator on the OU/FutureLearn Start Writing Fiction MOOC.

To find out more about Shanta’s writing, visit www.shantaeverington.co.uk

This entry was posted in Uncategorized and tagged dystopian, fiction. Bookmark the permalink.