Kevan Manwaring’s latest book Desiring Dragons: Creativity, Imagination and the Writer’s Quest was published by Compass books in May this year.  Unlike Kevan’s recent collections of folk tales, Desiring Dragons is described – somewhat tongue-in-cheek – in its preface as a ‘How to Write Fantasy’ book, and offers advice about fantasy writing gleaned from Kevan’s 13 years of teaching experience.  The extract, below, taken from the preface to Desiring Dragons, describes the aims of the book. 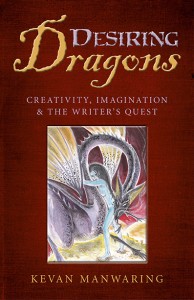 ‘The book is divided into two main sections. The first, ‘Desiring Dragons’, is an essay on Fantasy – its origins, evolution and application. Tolkien’s approach is foregrounded throughout (the book takes it title from him after all), although other authorities are also cited. There is no attempt to be encyclopaedic here. Rather than be considered the ‘final word’, it is hoped that the essay will prompt further discussion. The writing and reading of Fantasy is an ongoing research project for not only scholars and authors, but also fledgling writers, students, and, of course, readers.  The territory continues to expand – with every innovative book, film, graphic novel, play and computer game –  so an exhaustive charting of it would quickly become redundant. All that can be provided is an entreport.

The second section is a breakdown of what I call ‘The Writer’s Quest’, based upon the Old English poem, Beowulf, one of Tolkien’s chief influences. In this, the creative process of writing is explored in the context of the ‘journey of a novel’, and as such can be applied to all genres of writing. At the end of each chapter there are ‘questings’ – suggestions for follow-up activities.’

This entry was posted in research, writing guides and tagged fantasy, narrative. Bookmark the permalink.