OU Classical Studies student Ian Ramskill shares his experience of studying with us.

…Well it was ‘all Greek to me’ until I completed A275 Reading Classical Greek: Language and Literature, a wonderful module, on which more later; but first a quick introduction to myself and some of my experiences of studying Classics with the Open University over the last six years. In brief 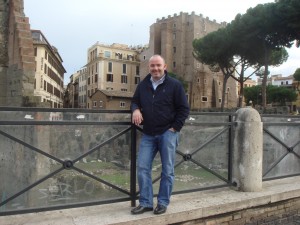 , I’m now approaching the big half century and I’m a freelancer in the aviation industry, having previously served in the RAF. Before joining the OU I had no experience of university level education, having left school at sixteen with a clutch of ‘O’ levels. A trip to Rome reignited my childhood interest in the classical world and I began to read more about it. This was the point at which, with some trepidation, I decided to give the OU a go, over twenty five years since I’d written more than a couple of sentences together, never mind an essay!

The OU humanities gateway module AA100 (The Arts Past and Present) was just great; it still surprises me how much my essay writing developed and improved in just 8 months. After this I worked through the then available Classical Studies modules A219 (Exploring the Classical World), A330 (Myth in the Greek and Roman Worlds) and the two Latin courses (now the new A276); all were intriguing, informative and utterly engaging. In A219 we studied Homer and classical Athens – with, among other things, an in depth analysis of the Parthenon – before moving on to the fall of the Roman Republic and Augustan poetry. The Latin courses, while hard work, were very satisfying. Translating book II of the Aeneid – the fall of Troy – was a particular highlight once I had acquired the language skills to do so. In A330 we investigated literary, artistic and political uses of ancient myths; Ovid’s Metamorphoses in particular was well received. It would be remiss of me not to mention the fantastic support I received from all of my tutors; without fail they have been enthusiastic and encouraging, providing timely and constructive feedback on assignments and being readily available to provide help when needed.

So now to my most recent module, A275, and the study of Greek langu 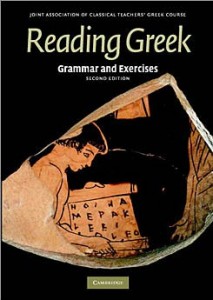 age and literature. I found this a challenging module, but the excellent materials provided by the OU – coupled with some tenacity on the part of the student – made it more than manageable. One of the first challenges was to master the Greek alphabet, but there is a great free learning aid available to non-students on the OU Classical Studies department website, which also acts as a taster of what the module offers. Those who take up the module are almost spoiled with the amount of textual, audio and visual learning aids provided; CDs provide recordings of many of the Greek exercises, and there is lots of help with the translations of adapted texts. There are also some great websites to aid vocabulary and grammar retention. I used these almost daily in my breaks at work; with language work ten minutes here and there, but often, is a useful learning strategy.

Even students who do not wish to go on and read original Greek texts benefit from the focus on analysing different translations and assessing their merits. The module 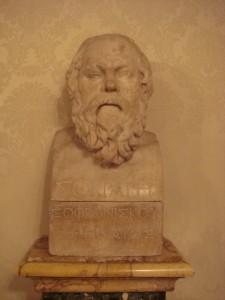 can also be tailored to your individual needs; as you progress you can slow down the language learning and invest more time in studying literature in translation if you prefer. The three key texts studied in translation are Euripides’ Medea, Aristophanes’ Clouds and Plato’s Defence of Socrates.These are three pearls of Greek literature; the betrayal and horrific revenge depicted in Medea pushes what it is to be human to the limit. Clouds,with its irreverent and bawdy humour, may not be to every modern reader’s taste, but offers important insights into contemporary views on philosophy and indeed daily life in late fifth-century BC Athens. Plato’s work though, for me, is brilliant artistry; the CD recording which is provided enhances understanding of the text, as with the audio-visual materials for the rest of the module (these include a DVD showing a performance of Medea, and a CD recording of Clouds).

To say that I have enjoyed the last six years would be a gross understatement; investigating and writing about the classical world has given me a much more informed understanding of this fascinating era. It has been difficult at times balancing work and family commitments but somehow I have managed to make the time and meet the deadlines; it is with gratitude that I give my thanks to my patient and encouraging wife. Now onwards to my final year and the new Roman Empire module, A340, which I’m sure will be just as enjoyable as all of the previous ones.

Editor’s note: if you’ve enjoyed reading Ian’s post and would like to know more about Classical Studies courses at the Open University have a look at our departmental pages, where you can find information on our modules as well as a whole range of free taster materials.