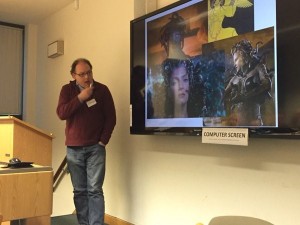 In the sixteen years I’ve taught for the Open University, I’ve often used movies and television as part of my teaching strategies, and this is just as true for the current module I teach, A330 Myth in the Greek and Roman Worlds. Some of these approaches are obvious – if one wants to talk, for instance, about the Gorgon Medusa, it makes sense to show how the cinema has represented her, in movies such as the 1981 and 2010 versions of Clash of the Titans. Such clips can show students that they actually know something about changing depictions of 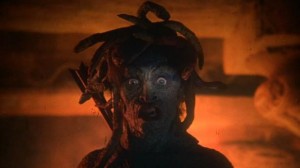 mythological characters. But it’s also possible to be a bit more imaginative.

In 1945, Metro-Goldwyn-Mayer produced the nineteenth cartoon in their cat-and-mouse series Tom and Jerry, ‘Mouse in Manhattan’, directed by William Hanna and Joseph Barbera. It’s an unusual entry in the run. Instead of the usual mayhem caused by Tom’s unsuccessful attempts to catch Jerry, the premise is that Jerry, bored with life in the 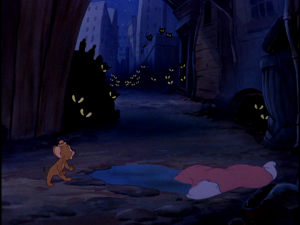 country, sets off for the bright lights of Manhattan, leaving a note for Tom (who is otherwise barely present). The rest is taken up with Jerry’s adventures in New York, and the dangers he faces. There is no town mouse to equate with Jerry’s country mouse, and the existential threat that drives Jerry back to the country is feral cats, rather than dogs. But the fundamentals of the fable are here, and whilst I am not suggesting that Hanna or Barbera had necessarily read Horace or Aesop (they may have, or they may not), they almost certainly had encountered the story in some form. It has, after all, been much repeated through history; Beatrix Potter retold it in The Tale of Johnny Town-Mouse, and in 1936 Walt Disney had overseen a Silly Symphonies short called ‘The Country Cousin’, which adapted the fable more faithfully than ‘Mouse in Manhattan’. One effect of showing this to students is to put them in a good frame of mind – who doesn’t enjoy a good Tom and Jerry cartoon? But it also demonstrates how stories are transformed as they are repurposed, and also makes the original fable seem less remote to students.

Fable is not often dealt with in myth courses. What can 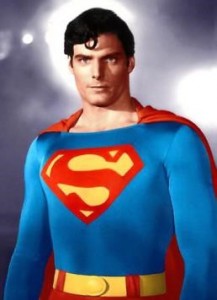 using cinema bring to wider understanding of what is more traditionally understood as ‘mythology’? One issue that can confuse students is that various different versions of myths proliferate through antiquity and beyond. Does Hippolytus die at Troezen, or is he reborn as Virbius in Italy? Who kills Medea’s children, the Corinthians or their mother? I explain this through the modern phenomenon of rebooting screen franchises. There are several screen versions of the superhero Superman, with different versions of when and how Kal-El arrived on Earth from Krypton, and his early life. Similarly, the James Bond movies were rebooted in 2006 with Casino Royale, showing Bond’s first mission as a 00 agent. All previous movies were disregarded, and elements from those, such as the terrorist organization SPECTRE, could later be reintroduced. Cinema audiences cope with this perfectly well, so what is the problem with Euripides’ three incompatible versions of Helen of Troy? 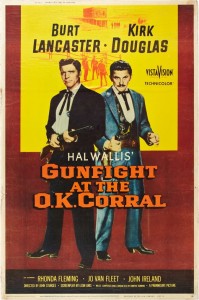 My most unusual use of cinema to teach myth is when I show students two versions of the 1881 Gunfight at the O.K. Corral, in 1946’s My Darling Clementine, and 1957’s Gunfight at the O.K. Corral. I ask the students to note significant differences between the two (for instance, Doc Holliday dies in the gunfight in the former, and survives it in the latter). I then show how the  two versions relate to what actually happened, and explain that while the later movie is a little more true to

Hopefully this will spark further ideas of how to use cinema in teaching. Let us know in the comments what you do.

Editor’s note: Tony has also produced various Open University learning resources which you can access for free via OpenLearn here.