Art That Made Us; an exhilarating epic alternative journey through British history 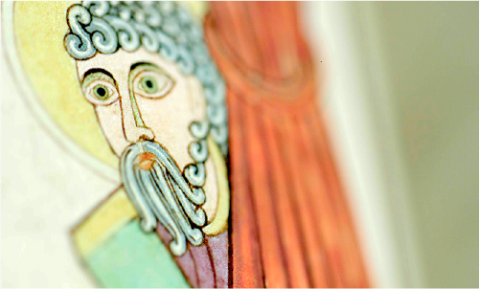 Ground-breaking new OU/BBC co-production Art That Made Us, broadcasting on BBCTwo over eight episodes from 7 April, brings an exhilarating alternative history of the British Isles over 1500 years through art on an epic, yet intimate, scale. The series was guided by academic consultants from the Faculty of Arts and Social Sciences, Professor Sara Haslam, Dr Gemma Allen, and Dr Amy Jane Barnes, supported by Media Fellow Dr Jo Paul.

In a spectacular feast of colour and imagery, well-known and unfamiliar artworks from key points in history are explored in new ways by cultural historians and leading British creatives – including artists, writers, and actors – revealing the impact of historical art upon their own works today.

Dr Amy Jane Barnes, Staff Tutor in Art History highlights the “ambitious and stylish” nature of the series.  “The stories presented throughout the series provide a view of art and creativity, one that is both diverse and sometimes subversive, which departs from the well-trodden narratives that will be familiar to many. This collection of stories is rich, engaging and above all accessible. I think it will offer viewers new perspectives on our collective creative past.”

Beginning with the battles after the Romans left, the series focuses on art that emerged at times of crisis and turbulence, the key moments of historical change: the creative renewal following the Black Death; the religious upheavals of the Reformation; the Civil Wars that raged across the kingdoms in the 17th century; the Georgian era’s consumer boom and growth of a new conscience about slavery; the explosive growth of the city during the 19th century; the depths of war in the early 20th century; and the exhilarating expansion of culture, youth, sex and rebellion since the 1960s.

Dr Gemma Allen, Senior Lecturer in Early Modern History, features prominently in the third episode, bringing her expertise to discussions around “Queens, Feuds and Faith”, as first England, then other parts of the British Isles, turned Protestant. She was “delighted that I feature in the episode on the 16th century, and that I am able to share with viewers the hidden messages contained in Mary Queen of Scot’s needlework. Why does this queen in captivity decide to embroider a ginger cat playing with a little grey mouse? Is it just an appealing design, or is it a commentary on her relationship with Elizabeth I? Is Elizabeth I the ginger cat who is tormenting her?

“In contributing to this episode, I was able to draw on my own research on 16th century women’s political activity – it’s something that’s often overlooked, especially for non-royal women, but I believe that you can’t understand the politics of the time without including women’s activities.

“That’s something that all the nominated academics were keen to do in our work on this series: we wanted to help the production team bring to the screen overlooked stories of creativity that challenge accepted ideas about our history.”

For Professor of 20th-Century Literature Sara Haslam, “being involved with the series as an OU academic has reminded me how vital it is to tackle master narratives when considering and curating a nation’s cultural and creative histories. Those top level narratives, helpful as they may be for some storytelling, are built on a richness and variety that needs to be seen to be believed!

“Little-known objects of beauty or interest; lesser-known creative artists with diverse stories to tell – what a great way to explore and celebrate the rich cultural history and heritage of the nations. I’ve hugely enjoyed playing a part in this project.”

Discover more about the series with extra content, exclusive interviews with contributors to the series, and nine inspiring creative women that history overlooked, at Broadcast and Partnerships

Image: A page of the Lindisfarne Gospels, displayed in the British Library. Copyright ClearStory/ Menace

This blog is protected by dr Dave\'s Spam Karma 2: 744 Spams eaten and counting...