Today’s adventure leaves the warmth of Rome for the wet of Scotland (brrr!), and a must-see location for the pilgrim to poetic graves, Robert Burns’s mausoleum in Dumfries. In my last posts I described how my journeys to the graves of Gray, Keats, and Shelley proved that these sites had all been made more romantically ‘poetic’ than they originally were, improved either through actual additions or through representations, so as to look more like readers of their famous poems thought that they should. This is what happened to Robert Burns’ grave, too. 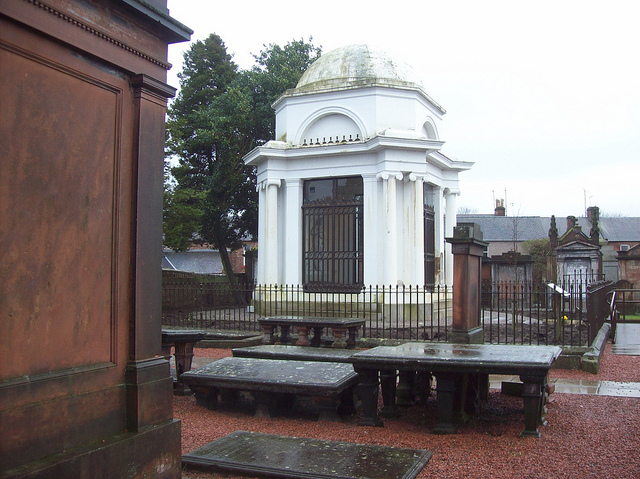 The graveyard in Dumfries is mostly red sandstone and pretty depressing in February rain. Walk round it and you’ll find the first site of Burns’s grave, been marked by a plain stone, which was set over it some years after the poet’s death in 1796. Across the churchyard, though, is a neo-classical fantasy, domed and pillared in whitewashed stone, deliberately exceptional among the upright red sandstone monuments that surround it. This is the Burns mausoleum to which, in 1815, Burns’s body was moved. Peer in, and you’ll see that within the domed enclosure, the poet is shown at the plough being accosted by a brazenly bare-breasted Muse of Coila, who brandishes the mantle of inspiration threateningly over the Poet’s head, in imitation of a scene described in Burns’s dedication to the second edition of his Poems, Chiefly in the Scottish Dialect (1797):

The poetic genius of my country found me as the prophetic bard Elijah did Elisha – at the plough; and threw her inspiring mantle over me.  She bade me sing the loves, the joys, the rural scenes and rural pleasures of my native soil, in my native tongue.

Piled high when I first saw it in sheeting February rain with birthday celebration flowers, the mausoleum is a lavish monument to national poetic celebrity, and it was certainly designed with the literary pilgrim in mind. As the address at the official dinner (6th June 1815) had it, clumsily but tellingly mis-quoting Thomas Gray’s Elegy Written in a Country Churchyard (1751) as a sort of prototype for the experience:

Full many a pious pilgrim shall repair

To drink fresh draughts of inspiration there:

This idea of a drinking-fountain-cum-bonfire has never been to everybody’s taste – not to Keats’s for example, and even less to William Howitt’s, who felt, as most mid-Victorians must have felt, that neo-classical allegory was inappropriate to the earthy, nativist realism of Burns.

Still, it wasn’t so much the rhetorical mode of the mausoleum that was problematic, as the supposed manner of Burns’s death. Throughout the nineteenth century, Burns was thought to have died of alcoholism (rather than, as later theories have had it, of heart failure associated with early rheumatic fever, or as is currently speculated, of brucellosis). This, even more than his marital irregularities and his  radical politics, caused the dignitary charged with the job of giving the dedication speech at the opening of the mausoleum positively to writhe with delicate evasions as he endeavoured to avoid censuring the dead while being obliged to admit that there were grounds for such censure. The assumed cause of Burns’s death informs Wordsworth’s terse characterisation of  Burns and Thomas Chatterton,  in his poem ‘At the Grave of Burns’ (printed in Poems, Chiefly of Early and Late Years (1842)), as ‘mighty poets dead in their misery’. It also more covertly governs Dorothy Wordsworth’s description of the Dumfries graveyard in her ‘Recollections of a Tour Made in Scotland A.D. 1802’ as ‘unpoetic ground.’ Burns’ mausoleum looks on the one hand like an expensive attempt to make over Burns’ grave into something more ‘poetic’, fit for a national bard. Yet it never seems quite to have been imaginatively convincing in the way that the graves of Gray, Keats and Shelley were. So it turns out that my desire to laugh at the Muse of Coila is entirely conventional.