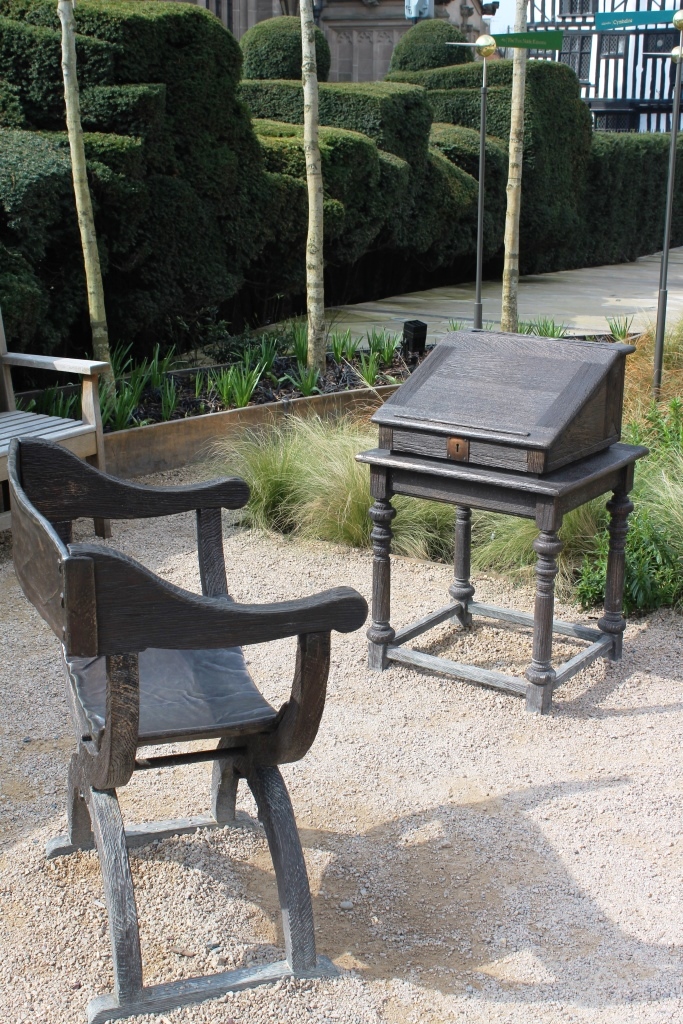 Let me fast-forward two centuries from my last post, fly back across the Atlantic, and transport you to Shakespeare’s Stratford-upon-Avon. The redevelopment of New Place commemorating Shakespeare’s death in 2016 offers a test of the extent to which the idea of the house of genius set within enchanted ground is still operative in the world of writer’s house museums. Unlike any of the houses that we’ve travelled to thus far, there is very little trace left above ground of New Place, the house that Shakespeare bought in 1597 when he had become a wealthy writer. All the same, the superficially radical redevelopment of 2016 remained remarkably true to the roots of the writer’s house museum in romantic and Victorian culture. That is to say, it is founded on and expresses the romantic belief that there is such a thing as genius, that genius is shaped by its environment, and especially by its native landscape, and derives its force from the Victorian sense that if environment gives genius its ‘national’ character, Shakespeare’s is best celebrated or appreciated by the nation ‘on the very spot’ where Shakespeare lived, worked and died in April 1616.

Between 2010 and 2012, the Shakespeare Birthplace Trust partnered with the University of Birmingham in a series of archaeological digs to determine the shape and size of Shakespeare’s original courtyard house, which had been demolished by its then owner Reverend Francis Gastrell in 1759. The dig determined the outlines of a gatehouse, a courtyard, and a service range, delimiting the shape and size of a substantial house. Combined with a roof scar on the gable of Nash’s house next door, this gave the outline of the Elizabethan house.  A lengthy process of consultation followed on what to do with this information, culminating in the opening of New Place in September 2016.

The SBT engaged a distinguished stage designer, Tim O’Brien, who had worked for the Royal Shakespeare Company in the 60s, 70s and 80s, and had designed part of The Shakespeare Exhibition for the 400th anniversary of Shakespeare’s birth in 1964. O’Brien’s initial intervention in 2014 specifically addressed the problem of the inadequacies of the actual to invoke what we might loosely call the literary. He began by criticising the literalism of the Birthplace, arguing that New Place offered poetic opportunity:: ‘What tremendous fortune to find that the house, in which he died, is represented to you by a mute scar on a neighbouring wall, triggering your imagination to dwell on Shakespeare’s end, until he is there, but the house is not.’ On the one hand, the ‘mute scar’ stands metaphorically for the ineradicable mark of writing laid on the national consciousness by Shakespeare. But here too is a founding recognition that the ‘mute’ triggers contemporary imaginations to give reality to Shakespeare. O’Brien suggested:

‘To the scar, add a totem fragment. To that, add a hologram that comes and goes. At its heart, in a shelter fashioned from smoke, set a tantalisingly unapproachable man, oblivious of us.’

In place of a Victorian aesthetic of reconstructing the author through something akin to lost-wax casting, whereby the reconstructed carapace of space and belongings indicate an author-shaped space at its centre, O’Brien proposed something romantic, fundamentally anti-domestic and anti-realistic.

The result is thus: on entering New Place, visitors see first a bronze Gate, marking the original gatehouse, which is prominently surmounted by Shakespeare’s crest. Jinking to the right round a screen-wall, one comes across a globe on a plinth, incised with an Elizabethan map of the world. This siting of Shakespeare globally is balanced by an object siting him locally, an open deed-box made in bronze and captioned ‘Shakespeare has the/True title to his house’. Crossing a mark on the ground into the site of the original courtyard the visitor is confronted with a bed of brightly coloured pennants that swivel with the wind among tossing flowering grasses, inscribed with the titles of the earliest plays through to the latest. Together with the slabs engraved with the opening two lines of individual sonnets which, in O’Brien’s words ‘swim like fishes’ at the visitor’s feet, this describes Shakespeare’s work as living and elemental, air and water rather than text. Stepping towards the steel ribbon in the floor inscribed ‘The Heart of the House’, the visitor passes a stainless steel model of an Elizabethan ship floating above a pit of sand lined with what seem the half-buried wooden ribs of a shipwreck. The caption cites Prospero’s order to Ariel to bring back into being the ship thought to be irretrievably lost: ‘To the King’s ship, invisible as thou art!/ There shalt thou find the Mariners asleep/Under the hatches’. The ship, salvaged and transformed to silver, perfect, pristine, spectral, evidences Shakespeare as Prospero in absolute command of the powerful magic of wishful thinking, and this construction is reiterated in the circular space enclosed by pleached hornbeams at the centre of the site of the house proper, which is conceived as at once Shakespeare’s study and, less intentionally, as Prospero’s cell.

O’Brien’s re-presentation of New Place sets the writer’s desk and chair at the heart of a house studded with objects conceived as conundrums of authorship, and describes Shakespeare’s genius through transforming historically-bound real objects into the holographic permanence of allegory. Tempting though it is to regard this abandonment of Victorian materialism as avant-garde, it is actually congruent with older Romantic depictions of Shakespeare. To illustrate this, let me close by quoting at length the explanatory caption to the ambitious if undistinguished painting that sits in the Shakespeare alcove in the house of nineteenth-century architect Sir John Soane, now a museum in London:

‘Shakespeare, resting on the lap of Fancy, is contemplating the visions of glory which she invokes/ while lyrical poetry rising from earth invites him to ascend to the brightest heaven of invention/ Tragedy and Comedy are calling before him the shadowy forms of his principal Dramatic Characters/ ….The Tempest, the enchanted isle, and its inhabitants….’