English demand also seems to have driven the development of ‘Juliet’s House’ as a tourist attraction. The poet Samuel Rogers wrote in his bestselling Italy: A Poem (1822-8) ‘Are those the distant turrets of Verona?/And shall I sup where Juliet at the masque/ Saw her loved Montague, and now sleeps by him?’ Rogers’ note to these lines makes it clear that he had viewed the house: ‘The old Palace of the Capelletti, with its uncouth balcony and irregular windows, is still standing in a lane near the Market-place.’ In 1829, the house was pointed out to Thomas Ireland’s party. Appetite for the house increased; in the late 1840s, the Baroness Blaze de Bury and her party engaged there in the sort of imaginative experiment typical of the literary tourism of the time. Blaze De Bury insists on the ‘truth’ of the story of Romeo and Juliet in a number of ways, adducing archival chronicles, comparing Shakespeare’s plays to the original accounts, and so forth, but her main system of authentication is the felt power of poetry to transform place: the house must be authentic because she experiences it as authentic: ‘Why, if you will but take the trouble of listening, you may hear them within calling ‘for dates and quinces in the pantry’; and as the evening shadows fall, masque after masque goes by to Capulet’s feast. Never tell me that Juliet dwelt not there, and that it was not through that gateway that Romeo passed…’.

Despite the charm of the Baroness’ imagineering strategies it was not an easy trick to pull off.  The house was supposedly authenticated by a stone plaque showing a hat, and equally conveniently, for both visitors and proprietor, it was an inn and therefore readily accessible to the public. There its suitability as a site for ‘poetic memories’ ceased, as visitor after visitor complained. Dirty, dilapidated and commercial, it was unaccountably short of the essential balcony: ‘there is a balcony, certainly, but too high, I think, for even the ardent Romeo to have climbed’. No contemporary stage-production would have been possible without a balcony; equally no other depiction of the lovers’ mutual declarations could be imagined without a balcony, and a gothic balcony at that. No wonder tourists were disappointed.

On the one hand, then, visitors expected to see Juliet’s house; on the other hand, increasingly it did not look as it should – that is to say, how it had come to look on stages right across Europe. Between 1937 and 1942 it was therefore provided with a rose-window, a gothic-style doorway, and a balcony, of which it is regularly said that it is either a sarcophagus or a water-trough, in unconscious reiteration of the old arguments as to the provenance of Juliet’s tomb.  Since then it has continued to evolve, pressed on by Zeffirelli’s on-location filming in 1968. 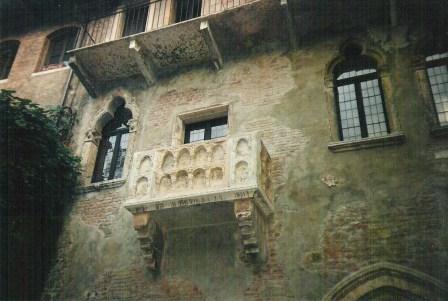 Nowadays around a million visitors a year come to the courtyard. While continuities between early enthusiasts musing over the tomb and modern enthusiasts posturing on the balcony are very evident, there has been a shift away from the necroromanticism practised at the tomb towards a celebration of transgressive love at the house – a transgression and exuberance expressed in the mild vandalism of  fondling the right breast of the statue of Juliet, chewing-gum-attached messages, love-locks and the like.

The house itself is much quieter and was hosting a large and beautiful display of nineteenth-century womens’ clothes, plus a display of paintings of nudes writhesomely reclining. The rooms seemed to be filled with disembodied Victorian women viewing Juliet in what used to be called the altogether. The bed comes from Zefferelli’s film-set and was surrounded by ghostly-white Victorian underwear hanging on dummies. The intimation of Victorian erotica is appropriate, though – nineteenth-century investment in Juliet seems to have been fixated on the spectacle of Juliet horizontal and dressed in white whether in tomb or bed. 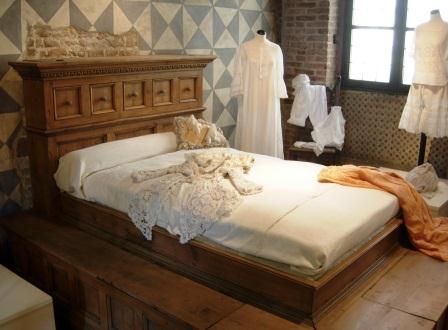