In recent years there has been a proliferation of online platforms that allow researchers to do things like create their own profile, share their research and network with other researchers. It can be difficult to know which of these platforms to use, so here we take a brief look at a few of the most popular and see what their strengths and weaknesses are:

The ability to create a personal profile on Google Scholar enables you to promote, collect metrics on and disambiguate yourself and your work – you basically get your own page, can add a little biographical information and list your publications. It is quite a traditional platform, which does not facilitate networking or sharing in the same social media-inspired way as other services.

A lot of people are drawn to Google Scholar because of the wide coverage of its database, which also means it tends to generate higher citation counts than other platforms, and its ease of use. However, the platform is criticised on numerous counts. Common complaints include the quality of its publication and citation data, the fact it is easily gamed and the fact that Google don’t publish a list of content indexed in Scholar.

ResearchGate is a popular platform which claims over 14 million members. It is free to join and quite social media –like in design, having been described as “a sort of mash-up of Facebook, Twitter and LinkedIn” by The New York Times. You get a personalised feed based on the people you follow, you can endorse other people’s skills and recommend their papers.

Its main functionality includes the ability to create your own profile, post your own research and data, get stats on how well read and cited your research is, read other people’s research, connect with peers, participate in discussions around research problems and even find new jobs.

However, ResearchGate has been criticised for infringement of copyright,  purveying bad metrics and sending unsolicited emails and automatically creating profiles for researchers who do not want them amongst other things.

Academia functions in a very similar way to ResearchGate. It provides a feed on your homepage based on people you follow and your stated research interests.

Academia claims over 58 million people have signed up, uploading over 20 million papers but although this figure is higher than ResearchGate’s a survey found that the latter has much higher active usage.

Again, it is free to join but a number of features are only available to Premium users, who pay a fee. These features include more in-depth searching, hosting a personal webpage and analytics on who’s reading, citing or otherwise mentioning you and your research.

Academia has also received criticism for an initiative that invited users to pay in order to have their papers considered for recommended on the site and for using a .edu domain in a misleading way

Mendeley is primarily a reference management tool and has some handy features in this regard, such as automatic extraction of reference information from PDFs, annotating of PDFs, sharing reference lists and compatibility with certain word processors to make citing and creating bibliographies more streamlined.

However, it also offers the ability to network with peers, keep up-to-date with new research, search for jobs and even acts as an online data repository.

Elsevier purchased Mendeley in 2013 and most criticism of the platform is focused on this ownership, with some concerned about its long-term viability on financial grounds and others feeling the sale conflicts with Mendeley’s original open ethos.

LinkedIn is a general professional social network, which boasts over 530 million users. It is usually understood as facilitating job seekers and recruiters but actually offers numerous features that researchers might find useful, such as a profile page, listing publications and qualifications, networking with peers (including the ability to “endorse” and “recommend” peers) and the ability to join discussion groups (based around topics, research areas or institutions for example). It is also useful to be able to see certain data regarding who has viewed your profile and posts.

LinkedIn has received criticism for its premium services, its endorsement feature and other issues, including spam messages, pestering for updates and trying to mine users for their email contacts.

Here are a few questions to help you choose which, if any, of these tools to use:

What do you want from the tool?

Is your primary goal to connect with people from within your field, to reach people from outside of your field, to gather metrics on your performance or simply to have a public list of your publications? Thinking about your aims can help you choose a platform that aligns with them.

Where is your audience?

Which if these tools (if any) do your audience use? It makes sense to go where the people you want to reach are. There can also be differences in subject focus between platforms. For example, ResearchGate is sometimes considered to be more science-focused than Academia (even though both aim to be multidisciplinary).

How much time do you have?

The amount of time you want to dedicate to networking or promoting yourself via these tools can help inform how many of these different tools you want to use. If you find a certain platform easier to use or more fruitful than others, it may also inform which platform you use.

Furthermore, here are a few points to bear in mind:

Unmaintained profiles can lead to inaccurate information about you being made public.

Be careful which versions of your papers you post.

Publishers typically restrict which versions of papers can be shared on academic social networking sites. In this regard, it is considered best practice to look up your publisher’s policy before sharing your papers via services like ResearchGate, Academia or Mendeley. For example, it is unusual for publishers to allow researchers to post the final PDFs of articles online (unless they are open access) . We are not aware of any individual researchers being prosecuted by publishers for infringement but Elsevier and the American Chemical Society are currently pursuing ResearchGate itself for mass copyright violation.

These are all services from private companies, should you give them your labour and data for free?

There is an ongoing debate as to whether using these tools represents an ethical choice for researchers.

Making your research available via any of these platforms does not make it compliant with HEFCE’s policy for open access for the next REF.

You still need to deposit your research in an open access institutional (i.e. Open Research Online) or subject repository in accordance with the details of the policy.

On Monday Katy Jordan from IET gave a talk on Academic Social Networking Sites (SNS) as part of Open Access Week.  Katy is currently a postgraduate student and her provisional thesis title is Reshaping the Higher Education network? Analysis of academic social networking sites, so she was a natural choice to ask!

As the ORO manager I’m often asked how sites like ResearchGate and Academia.edu interact with the institutional repository, so I was a little anxious as to the implications for ORO from Katy’s research.  But Katy’s talk was actually a resounding re-affirmation of the case for the Institutional Repository.

Katy presented a diagram in her presentation where ORO sits alongside and complements both Twitter and Academic SNS. 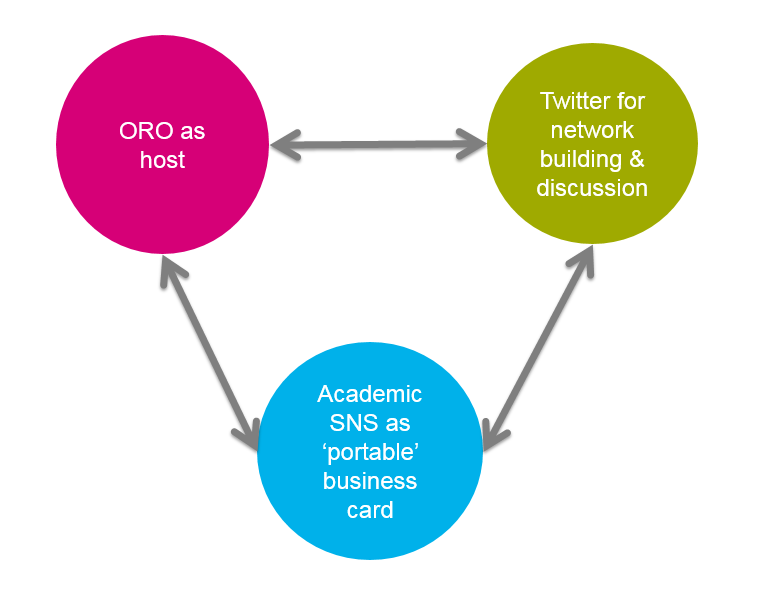 Katy’s talk was both wide ranging and engaging, other themes I found particularly pertinent were:

Thanks again to Katy for a fascinating talk.