Pauline’s poetry collection Bint is to be launched on November 13 in Gallery North at Northumbria University at 6 pm.  It is published by Red Squirrel Press. 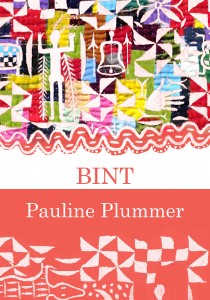 Pauline writes:  ‘Poetry is when an emotion has found its thought and the thought has found words’ Robert Frost.  I hope that what I have to say, if anything, is in the poems.   Is there a message in there?  As Alan Bennett said of talking Heads ‘Nobody knows and I certainly don’t’.   But there is an attempt to reach the heart of feeling, to use language to express rather than be locked in the prison house.

The poems are essentially lyric. This Greek term means song – a non-narrative poem expressing a state of mind or feeling.  The impact of the lyric has been perhaps reduced by making it a purely personal voice and the influence of Confessional poetry on what is written is still strong.  There is a sense in which the lyric should be addressing an audience; one should be singing to other persons but with the fragmentation of society you can’t be sure who they are.

There is still the concept of the poet as voice and witness.  Auden talked of the double nature of poetry as both magical incantation (Ariel) and wise/true meaning (Prospero

‘The will must not usurp the work of the imagination’ said Yeats but you do have a role as witness (Heaney).   Poem needs both intellect and passion he has said.  It does need to tell the truth.

There may be social and political pressures one is susceptible to, feeling compelled to give voice to the voiceless, to give space to those who have been denied.  But poetry makes its point in terms of imagery, symbols, language, rhythms. The poet may have no moral obligation to the world  but a poem often is a ‘truth won from life against all odds’ (Donald Davie).

In much contemporary poetry, irony and dispassion are the default tone; a self consciousness which I sometimes find has strangled the poet’s voice.   My poems in Bint are an attempt to express in a more barefaced way.   Some are personal, some are observations, some are personas.  There is immense freedom in subject matter in the writing of poetry now.    But I feel that these poems foreground a woman’s voice speaking and attempt to convey women’s lives from real lived experience.   But I hope this is done with a light touch – with what Heaney calls vitality and insouciance.’

This entry was posted in poetry and tagged launch, lyric, women. Bookmark the permalink.