Ghosts of a Low Moon 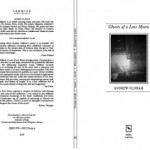 My first collection Ghosts of a Low Moon (ISBN 978-1-907276-60-6) is now available from Lapwing, Belfast at www.lapwingpoetry.com. The collection brings together new poetry and poems from magazines, such as, Ambit, The London Magazine and Interpreter’s House. The collection also features the poem, Why Guns Will Never Be Legal in England, heard on BBC Radio 4’s 2010 National Poetry Day edition of Poetry Please. A planned e-tour and readings will take place during 2011. The e-tour kicks off on my website www.andrewoldham.co.uk from February 2011, moving onto blogs in the UK, USA and the rest of the world. From June 2011 I will be touring with the poet, Ian Parks, celebrating Lapwing poets across the UK. The dates of this tour will be released in spring 2011. To celebrate the release of the collection I’m offering signed copies to buy at: http://www.andrewoldham.co.uk/Shop_AndrewOldham.htm. If you want to learn more about the collection or have a venue in the UK for poets, contact me at andrew@andrewoldham.co.uk. ‘Ghosts of a Low Moon captures a mixture of lyricism and damage which is a key note of the collection. I was struck by the different kinds of emotional hauntings in the book: childhood, lost loves, places and landscapes are all capable of returning to disturb the narrators of the poems…There’s a kind of damaged romanticism which underpins the vision of the book’ – Esther Morgan

One Response to Ghosts of a Low Moon