Good evening everybody. I’m going to be a little bit autobiographical because I want to tell you the story of my own interdisciplinary/multidisciplinary journey and then reflect a little bit on what those things mean for us in terms of not just the Open Programme but all Combined Honours provision.

So, when I went to school many, many years ago, you just followed that kind of single discipline approach. Unfortunately, I preferred ‘multidisciplinary’ so I found sex, drugs, rock and roll – and didn’t worry too much about the school work, so didn’t do very well. Fast forward to the 1980s and I had a very small child and discovered The Open University. I took a course called A101, an Arts foundation course, and I loved it, I absolutely loved it.  I don’t know if any of you remember this course, but it took the theme of the Industrial Revolution and then it took a lot of different disciplines and looked at those disciplines from an Industrial Revolution perspective, and then brilliantly, at the summer school, brought it all together. It’s like anybody would think that they did it deliberately [laughter]. And, for the first time, I realised actually you can make connections between all of these different subjects, and that inspired me so much. Fortunately, I was very, very lucky because grants were available in those days and I discovered that I could go full-time to a face to face University and get a grant, which was enough to pay for childcare as well as get me through the course. I started on a course called the Diploma of Higher Education, it wasn’t a diploma, it was the diploma and it was specifically designed for mature students. It was at Manchester Poly[technic] and the design of it was such that you could defer the decision that you wanted to make about which degree you finally went to when you got to the end of it. So, I went there thinking ‘well I’m going to do 19th Century Literature because that’s what I loved in A101 and that’s what I’m going to focus on’. But when I got there, there was this whole array of stuff that I could do but I couldn’t choose, so I even did some maths for the first time since school and I discovered that I could actually, if I made a special request, do a bit of computing science. So, just to give you a flavour of when this was; in the first year, we had a programming module and we had a systems analysis module, and the systems analysis module only ever used warehouses as an example of what you were designing systems for, so fairly stave.

So, I realised then that actually I didn’t want to do just 19th Century literature and I didn’t just want to do computing science, so actually it would be quite interesting to mix them all up together. So that’s when I really started my combined, or more interdisciplinary, route and I managed to carry that on into a Masters programme at Manchester University which was called ‘Technical Change in Industrial Strategy’ (very 1980s), where we were bringing together kind of theories of innovation with developments in technology and science. So, I did stuff on the history of science, the history of technology, philosophy of science; really, really, interesting stuff. And then my life was full of good luck really because the Poly then decided that they were going to put on a new degree called ‘IT and Society’, which was designed to produce a new type of graduate – one that had the technical skills and knowledge and understanding but could also speak to people in English. So, this was what we tried to do, and I was very lucky that I got that job and we worked on developing that degree. But then, somehow or other, as the way these things happen, I ended up in the Sociology department, really with a focus on Sociology of Technology.

At the time, I was really lucky; it was in those days when you had to teach certain things but sometimes you could teach something that you really liked, so you could put on a module on that you liked. So, a colleague and I put on a module called Science and Literature – we framed it in the concepts of the CP Snow debate about Two Cultures and the Snow Levers controversy about which was the more important. So, we picked 3 novels, it was a short course – he did the literature bit and I did the science bit – so we did Frankenstein, Brave New World and we did.. I loved that course to bits.  I don’t know if the students did, but I did, and it was really good to teach. In the Sociology department, I fetched up alongside some people. Most of them were ethnomethodologists, which I won’t go into at the moment, but they were very much into computer supported cooperative work. So, they were sociologists who were kind of into HCI, the kind of people side of computing. I distinctly remember an event where they tried to bring the computing science people from the STEM Faculty alongside the sociologists from the Humanities Faculty to talk about where they could join up, and it was very clear two tribes divide there. The computer scientists accused the sociologists of making words up, because that’s what they did, but they united in their hatred of the psychologists. 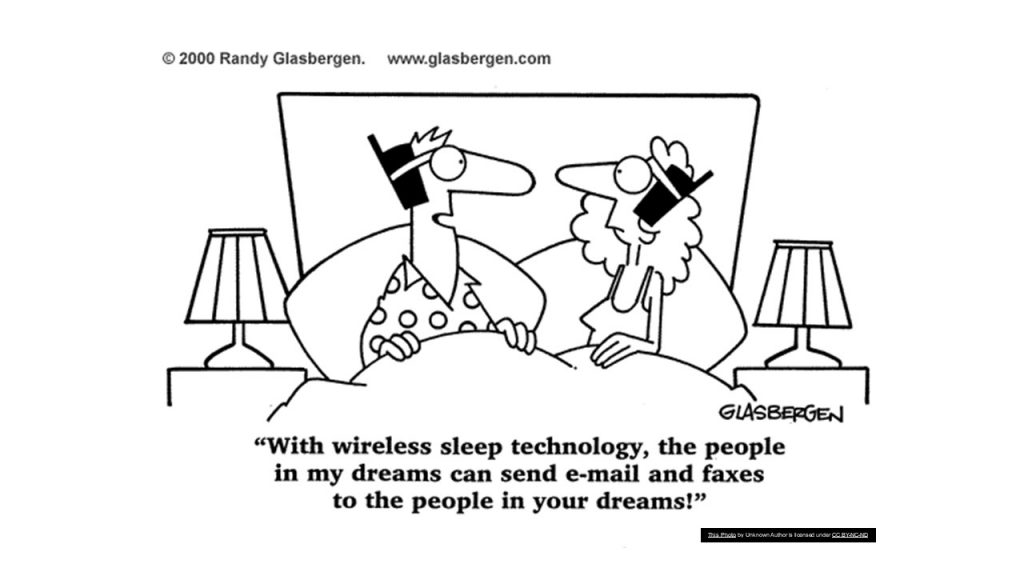 With wireless sleep technology, the people in my dreams can send email and faxes to the people in your dreams! So, completely and utterly ridiculous, but it does illustrate that technology developments don’t come in a vacuum. They come in a social context and a psychological context, and a political context, and an economic context. And if we are going to be able to make things work well and work effectively, we need to understand all of those contexts; how those factors interact. 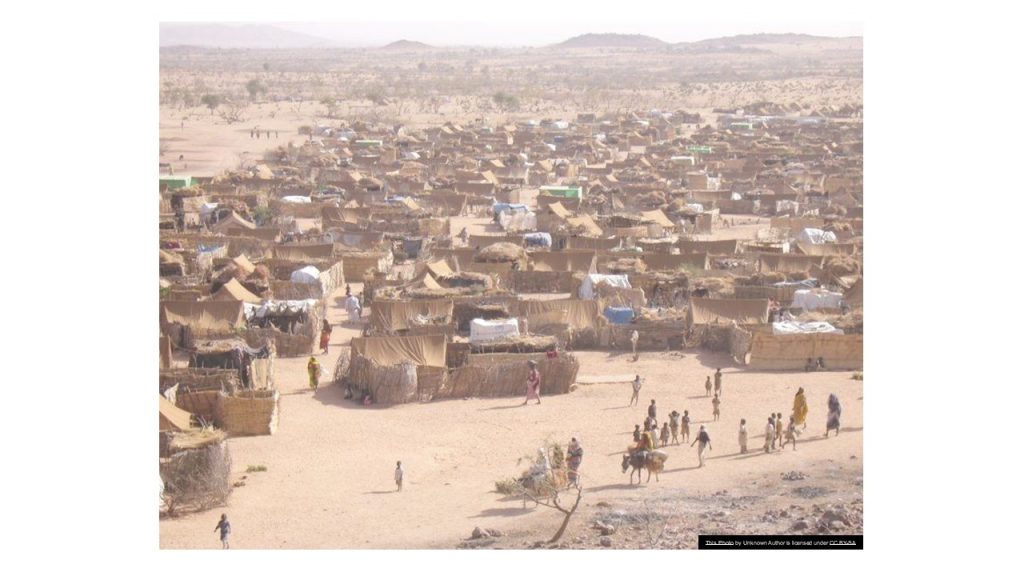 To be serious for a moment, this is a refugee camp. There’s people, no water, no food, displaced by climate change, by war, all kinds of things. If we’re going to solve those problems, and those are huge problems, really big problems, we need people who understand more than just how to put a water supply in. We need people who understand the people that they are working with to make that effective. There’s a whole load of stuff we need to do, and we can’t do it just with scientists, or just with sociologists, or just with technologists. We have to have people with an interdisciplinary knowledge and understanding in order to at least try to resolve some of those problems.

So, for me, that’s why the Open Programme is absolutely the most brilliant invention ever – really, really brilliant. I love it to bits, and I will support it forever. It does what we need degrees to do for students and so I’m glad that it’s here, I’m glad that it’s staying, I’m glad it will continue and hope it will get better and better- and that’s all I want to say.