The stately progress of Queen Elizabeth II’s coffin from Balmoral Castle to her eventual resting place in St George’s Chapel, Windsor, evokes an aura of timeless continuity. There are indeed significant recurrent features of royal funerals – especially those of the monarch – that span the generations. There is heraldic symbolism, a procession of some kind and a funeral service in church. Nevertheless, many features of present-day royal funerals are in reality of relatively recent origin, while as in a funeral of a private individual, circumstances and personalities elaborate and modify the details.

The sixteenth and early seventeenth centuries were a period of elaborate royal funerals reaching their apogee in the funeral of James VI and I in 1625. Thereafter, however, the discontinuity of the Civil War and interregnum had a lasting impact.  With the single exception of Mary II’s funeral in 1694 which was on a grander scale in apparent response to the tragedy of her premature death, later seventeenth, eighteenth and nineteenth century royal funerals were on a relatively modest scale. This trend was accentuated in the reign of George III when funerals retreated almost entirely within the walls of Windsor Castle. George III in 1820, George IV (1830), William IV (1837) and Prince Albert (1861) all died in the castle and were buried there without their coffins ever leaving the precincts.

Only with Queen Victoria’s funeral in 1901 was there a return to a large-scale public event. Her death at Osborne House on the Isle of Wight in 1901 necessitated transporting her coffin to the mainland and then on by train to Windsor. The fleet was lined up in review as the royal yacht crossed the Solent and there was then a procession across London from Victoria to Paddington. In accordance with the late Queen’s instructions the coffin was carried on a gun carriage, although the decision to have it pulled by naval ratings was a piece of inspired improvisation when the horses broke their traces at Windsor railway station. One potential innovation was, however, rejected: concern about objections to prayer for the dead meant that the King had to be dissuaded from including the Russian Kontakion in the funeral service. 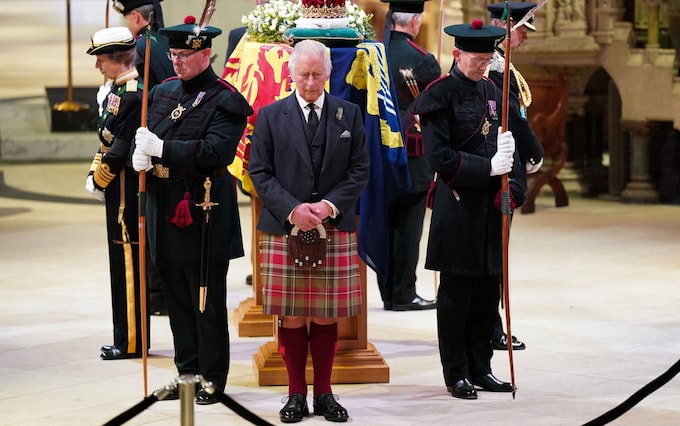 The Queen’s children surround her coffin during her lying-in-state. Source: https://www.telegraph.co.uk/content/dam/royal-family/2022/09/12/TELEMMGLPICT000309057604_trans_NvBQzQNjv4BqRo0U4xU-30oDveS4pXV-Vv4Xpit_DMGvdp2n7FDd82k.jpeg?imwidth=680

The main innovation for Edward VII in 1910 (see top of post) was the introduction of a public lying in state in Westminster Hall, intended to symbolise close democratic ties between monarchy and parliament in the context of the constitutional crisis arising from the Asquith government’s endeavours to curtail the powers of the House of Lords. The advent of broadcast media further enhanced a sense of wider public participation at the funerals of George V in 1936 and George VI in 1952. Religious services began to acquire an ecumenical dimension.

Events following Elizabeth II’s death are building further on these funerals of twentieth-century monarchs but also on the more recent experience of the funerals of Princess Diana in 1997 and the Queen Mother in 2002, notably in locating the main funeral service in Westminster Abbey rather than the much smaller St George’s Chapel. The late Queen was the first monarch to die in Scotland since the union of the Crowns in 1603, which has provided the opportunity for substantial unprecedented ceremonial in Edinburgh. The vigil of the Queen’s four children around the coffin in St Giles Cathedral is now described in the media as ‘traditional’, although there have in fact only been two previous instances, of George V’s four sons in 1936 and of the Queen Mother’s four grandsons in 2002. Broadcast media coverage is all-pervasive to an extent that would have been deemed obtrusive as well as technically impossible in 1952. The paradoxical appeal of such events is their capacity to appeal to a sense of historic continuity while also responding in innovative ways to present-day circumstances.

This post was published in collaboration with the Ecclesiastical History Society, of which John Wolffe was President between 2013-14. Their version is here: https://eccleshistsoc.wordpress.com/2022/09/16/royal-funerals-tradition-and-innovation/